Sure, I was moved by John McCain's recounting of his prisoner days. And the conclusion of his political speech was great political theater. But that's all it was: theater. Time to fight back, hard, and not by staying on the defensive.

Here are fifteen clear, forceful statements Democrats and independents can use to to counterattack. And the themes that should never be far from the conscious mind are: Electing McCain's too risky. He's compromised himself. Palin's an extremist. And, same old same old.
_________________________________

1. He's Big Government John now. As a Senator, John McCain has voted nearly all of the time with the president who has created the largest government and run up the biggest deficits in American history. That's not change you can believe in, my friends. He's 90% Bush, 9% Rove, and 1%That's-For-Me-to-Know-and-You-to-Find-Out.

2. She's Pork Barrel Palin. She's always been an expert in draining earmark money off the hardworking taxpayer. She submitted $197 million in earmarks - more per person than any other state -- in her current budget. And the citizens of her little town got fifty times as much federal pork as the average American! How'd she do it? She hired a DC lobbyist. That's right: A K Street shark to fill her Main Street coffers - and advance her career in the bargain.

If you don't like the way Washington does business, you don't like her. What's the difference between Sarah Palin and an old-style GOP crony? Lipstick. 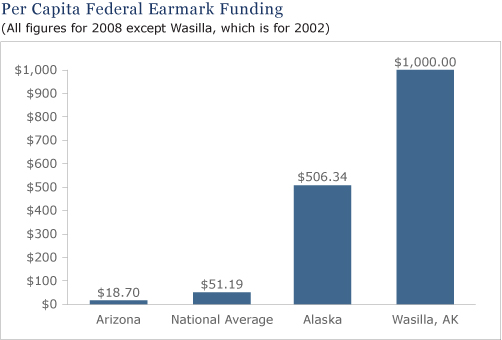 (Research and graph by The Center for American Progress, which is more measured on this topic than we are.)

3. McCain is actually more extreme right-wing about Iraq than Bush/Cheney: The Bush/Cheney administration has come around and accepted the Obama vision of a schedule for withdrawing troops from Iraq. Better late than never, I suppose. Yet McCain's last definitive statement on the topic was that we could be there for fifty or one hundred years.

4. McCain thought the Surge would fail! The press hasn't seen fit to mention this, but McCain said that he was "very doubtful that we have enough troops" there to get the job done. So if you believe "the Surge" worked, McCain's military judgment was wrong. And it also means he was more extreme about the war than Bush and Cheney. (See #3, above).

5. McCain's economy will be more of the same. If you like the economy we've got, vote McCain. Every time a Republican runs for office he pretends he'll do things differently. Bush said the same things in 2000. Look at McCain's voting record. Wonder what McCainonomics would look like? In the words of the old ad, you're soaking in it right now.

6. McCain has a massive new tax on the middle class, while Obama will cut taxes for 90% of Americans.McCain wants to make health benefits taxable for working Americans who are lucky enough to have health insurance. The tax credit he offers won't make up the difference after he's done making you buy insurance on your own (which is the other part of his plan.) And he'll help the rich get more breaks while leaving the rest of us where we are.

7. McCain doesn't support the troops -- he fought against better benefits for returning vets -- and, perhaps as a result, the troops don't support him.

8. He may be too old. Don't be shy about saying it. It isn't ageism, and it isn't unkind, because it's not the years that concern us. Rather, it's how he comes across, his apparent lack of understanding of basic details (like Sunnis and Shi'ites), and his already reduced weekly work schedule.

9. Who is this guy and what he has done with John McCain? The maverick's gone. He's sold out to the same group of "advisors" and special interests that have run the Republican Party for years. He'll do exactly what they want him to -- which is exactly what we've been getting.

10. What glass ceiling? The Democrats nominated a woman for VP a quarter-century ago! If they're only that far behind real change, I guess that's progress -- for the Republicans, anyway. During the civil rights struggle they were about a century behind. But stop pretending they've done something new -- or that they've done it for anything but cynical, poll-tested reasons.

The planet may not survive four more years of that kind of government.

12. Women must not lose control of their bodies. If your 14-year-old daughter was raped and became pregnant, Palin and McCain would force her to have the baby -- no matter what your family thought was best. Whose "family values" are those?

13. That Sarah Palin sure is an extremist. She doesn't like moderates, and apparently they don't like her. Did you know she spoke a few months ago to a radical separatist group whose founder said he hated the American flag and American institutions? That her husband was a longtime member? And that the party's founder died in an illegal deal gone bad -- to buy plastic explosives?

14. Experience? Did you know that Sarah Palin has more executive experience than John McCain? True, by the GOP's definition. But did you know that Barack Obama provided services to more than 90,000 people as a community organizer? That's more than 10 times the size of Palin's little town.

Obama's community organizing work was done for a faith-based initiative. Maybe he should've hired a lobbyist instead.

Obama's state senate district was more than 14 times bigger than Palin's town. And did you know Obama manages a budget in the hundreds of millions and hundreds (or thousands) of employees as head of the most successful political campaign in recent memory? That's effective executive experience.

15. Exploiting the dead and wounded of 9/11 with this video? Shame on them. It's like they'd crawl over graves just to win an election. Come to think of it, isn't that what they're doing?

At long last, sirs -- have you no sense of decency?

I've always liked John McCain. But he seems to have fallen in with a bad crowd -- and he's letting them call all the shots. As the guy who shares 90% of McCain's political DNA once said, "Fool me twice, you don't get fooled again."

Actually, this would make the third time we've been fooled.