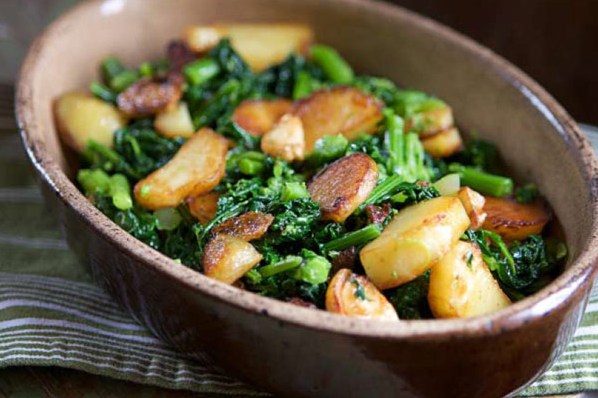 Cime di rapa (turnip tops), broccoli di rapa, broccoletti di rapa, and rape (räp' - eh), are Italian names for what Americans dub broccoli rabe, or raab. Because the cruciferous vegetable (Brassica rapa ruvo) descends from the wild mustard plants that have carpeted the heel of Italy's boot since ancient times, I think it deserves to keep its native name.

The problem is that the Italians have as many different local words for it as they have political parties. In Naples it's friariélli, in Umbria, rapi; Puglia and Lazio calls the greens broccoletti (not to be mistaken with broccolini) or just, cime, and so on. I like the affectionate-sounding compromise, rapini.

While the buds on the tops resemble those of broccoli, a member of the cabbage family, the similarity ends there. Rapini belongs to the spicy turnip tribe. Today, the broccoli with a bite has become mainstream. It has even become trendy.

Just what makes it so engaging? Leaving aside the fact that it's loaded with vitamins and cancer-fighting compounds, it seduces you with a pungent blast unlike any other vegetable, except Chinese broccoli (same botanical family), and, if you think about it, maybe a perfectly roasted, caramelized turnip. Its pleasant bitterness give you a surprising jab in the mouth that gets your juices flowing, making your taste buds plead for pork sausages or potatoes, foods that are usually paired with it and made sweeter by the marriage.
Tips from the original rapini experts: Italians

Related: A culinary tour of Puglia

Still, many a bold eater willing to venture into the realm of vegetables once considered strange say they can't get past its bitter taste. It's no wonder. Rapini is rarely cooked properly outside the borders of Italy.

I have succumbed to them in restaurants where I thought the chef surely knew how to cook them, and in precocious take-out shops where the greens, glistening like jade and studded with gilded garlic cloves, made my mouth water, only to be disappointed. They were either overcooked and stringy, or undercooked and bitter. This is not a vegetable to eat al dente, nor to benefit from a long boil, like sturdy collards.

"Broccoli rabe needs two things," said Nina Balducci of the legendary Balducci's in New York City, once a mecca of genuine Italian ingredients outside of Italy, "water and salt." The trick is to first blanch it in plenty of salty water to tame its bitterness and coax out its sweet side. Then, fish it out, still dripping wet, and coddle it in plenty of good olive oil and garlic. The greens should be almost butter-tender, primed to soak up the garlicky broth. Now they're ready to eat, or to cozy up to creamy polenta, pureed beans (try favas, chickpeas or cannellini in the style of Puglia), or succulent pork sausages.

The bitter greens get in your blood. When Andy Balducci opened the famous Greenwich Village store where his father worked the produce aisles and his mother, and his wife, Nina, cooked take-out food that the likes of Meryl Streep and Lauren Bacall took home for dinner, he flew in a few crates of cime di rapa from his native Puglia to test the waters.
Rapini. Credit: Julia della Croce

"It was a tradition in Corato, my home town," said Andy, who sold the grocery in 1999. "My friend grew it in his orto and his dream was to export it to Bari, the nearest city, 24 kilometers away. In those days, by horse and cart, it was like from here to heaven," he laughed. "We didn't sell it raw. Mom cooked it when it was available and we always sold out right away." The De Rigo Brothers, California farmers and owners of Andy Boy who supplied Balducci's with broccoli, perused the cooked foods whenever they visited. They'd ask the Balducci's about the vegetable everyone was making such a fuss over.

Eventually, they decided to grow it themselves from heritage seeds. Outside of Puglia, even in many parts of Italy, the vegetable is unknown -- except wherever Andy and Nina Balducci go. The couple have been known to travel with crates of it in tow. "We've introduced it to the Bahamas," said Nina.

We might be led to think that Puglia, which loves bitter greens overall (cime, chicory, escarole, dandelions), could claim them as their own. "Oh no," says Viola Buitoni, scion of the Perugia-based Buitoni family, producers of pasta and chocolate since the early 19th century. "Rape/rapi/broccoletti whatever you call them are very common in Umbria and also, Lazio. Our housekeeper made them, so I know they were an Umbrian tradition," she said. "In fact, there's a type of rapini I love that's native to the Trasimeno known as rapini del lago, "rapini of the lake." Seems there is yet another delicious Italian vegetable to be "discovered" and transplanted in America.

Probably my favorite rapini dish is one that Viola makes. She tosses garlicky rapi, as she calls them, with crisp-cooked potatoes. "[It's] a dish that was a staple on our table because it's a way to make good use of leftover potatoes. The leafy greens that were most common in our household in fall and winter were rapi." It is a very fine dish to add to your cold weather repertoire.

Serves 6 for a side dish

America has at last discovered this wonderful vegetable, but I'm convinced that people would like it more if it were prepared correctly. The secret to cooking broccoli rapini is to boil the greens briefly before sautéing to rid them of their excessive bitterness and to tenderize the stalks. Some people discard the stalks, but the thicker ones, once peeled, are delicious. To avoid overcooking the delicate buds, cook the stems for a minute first before adding the florets to the pot. After draining, the rapini are finished in the saute pan with olive oil and garlic. This second step when cooking vegetables is called "ripassare," meaning that the vegetable is passed again in the frying pan.

1. In a saucepan, combine the potatoes with enough cold water to cover and bring to a boil. Cook over medium heat until the potatoes are tender, about 20 minutes. They should be fully tender but not falling apart when cooked. When cool enough to handle, peel the skin from the potatoes, cut them lengthwise into quarters, and then cut crosswise into medium-thin slices. Set aside and let them cool.

2. Detach the stems from the tops of the vegetable. Using a small, sharp knife, peel the skin from the thicker lower stalks of the rapini (most of the bottom portion of the stalk) and cut them crosswise into approximate 2-inch lengths.

3. Fill a large pot with plenty of water to cover the greens and bring to a rolling boil. Add the peeled stems along with the salt, cover partially, and cook over medium-high heat for 1 minute. Now add the florets and cook them together with the stems until the vegetable is tender but not mushy, 3 to 4 minutes more. Note that if the stalks are at all crisp, they will remain bitter. Drain the greens, reserving a little of the cooking liquid and set it aside separately.

4. In a nonstick skillet large enough to accommodate the potatoes and the greens, warm the olive oil over low heat and add the garlic. Sauté over medium heat until the garlic is nicely softened but not colored, about 4 minutes. Transfer to a side dish. Raise the heat to medium-high and add the cooked potatoes. Sauté until they are golden and crispy all over, about 12 minutes, then transfer to another side dish. Warm the remaining 2 tablespoons olive oil over medium-low heat, return the rapini and the garlic cloves to the pan. Sauté until the greens are nicely coated with the olive oil and the garlic and heated through, about 3 minutes; if they appear a little dry, add a little of the reserved cooking water as needed. Return the potatoes to the skillet and toss all together. Adjust for seasoning and serve immediately.

Buy only very fresh rapini. The base of the stalks ought to be cream colored and crisp, not brown and curled. The leaves should be perky and ruffled, not dried out and floppy, and the buds bright green, never yellow.

The thicker stalks are meant to be eaten but need to be peeled before cooking, like mature asparagus.

To avoid overcooking the florets, boil the peeled stems for a minute before adding the florets to the salted water. Continue to the cook stems and tops together for 3-4 minutes until tender but not mushy. Drain and saute as described in the recipe.

A NOTE TO GARDENERS

Rapini hate heat. In Italy, they're planted in September for harvesting in November and December. Farmers markets where I live in the Northeast try their hand at them but they're not successful. The plants have too many tough stalks are all leaves, and have few, if any, buds. Brassica rapa ruvo (rapini) need Mediterranean or California-type weather to thrive.

Zester Daily contributor Julia della Croce wrote her first book, "Pasta Classica: The Art of Italian Pasta Cooking," in the 1980s. Since then she has published 13 titles about Italian food and travel, and co-authored several other cookbooks, including "Introduction to the Culinary Arts," the student textbook for the Culinary Institute of America.

The joy of late-season garden greens

The mother of all heirloom recipes from Brooklyn