Students at the University of Chicago are circulating a list of men who have shown "troubling behavior towards romantic or sexual partners," according to the group behind the effort.

The list was posted in restrooms and in the hallways of the Harper Memorial Library, according to the students who created it. A photo of the "Hyde Park List," a reference to the university's location, began circulating online Monday among sexual assault and feminist activist circles.

A similar list popped up in the spring at Columbia University, naming men on campus who had allegedly sexually assaulted other students. One appeared at Brown University two decades earlier.

Unlike the lists at Brown and Columbia, the printed list at the University of Chicago refers to a Tumblr page, which contained additional details, including descriptions like, "Often at fraternity parties." The Tumblr list was reported for harassment and was taken down Sunday. It returned online late Tuesday, and was taken down again Wednesday afternoon. 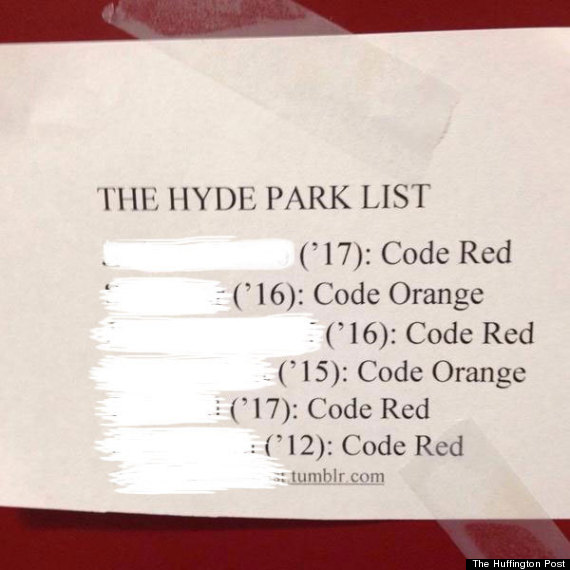 The men named on the University of Chicago list have diverse backgrounds. Each name has either a "Code Red" or "Code Orange" note next to it, which the sponsors say represent the severity of supposed offenses.

The anonymous activists behind the list -- a mix of sexual assault survivors and allies, according to students -- cautioned that the names should not be considered a "rapist list."

"We are not claiming to be judge, jury, and executioner," the group wrote in a note online. "The individuals on the list are individuals we would warn our friends about, because of their troubling behavior towards romantic or sexual partners. Usually, this means either a pattern of negative/troubling behavior, or a very significant negative act. Sexual assault can be one of them, but we are not claiming that all the individuals on the list have committed sexual assault."

The Huffington Post is not naming the men or linking to the Tumblr because there is no indication that any of the men have been accused or convicted of any offenses.

The University of Chicago is one of 78 colleges and universities under federal investigation for how it handles sexual violence.

"The University has failed to protect the community, sexual assault is historically deeply underreported, and we have failed as a campus to have a real and serious conversation about sexual assault on campus," the Tumblr says. "... If administration cared about protecting survivors, and not their own reputation, this list would not exist."

The university declined to comment on the list, but said it is committed to "to preventing and addressing sexual misconduct, unlawful harassment, and discrimination."

"University efforts have included the creation of student support programs such as the Sexual Assault Dean-on-Call, the Bias Response Team, and RSVP (Resources for Sexual Violence Prevention); the growth of confidential resources offered by the Student Counseling Service and the SADoC program; and special training for University police officers in responding to acts of sexual violence," the school said in a statement. "The University also has continued to update its policies and disciplinary processes, as it did in 2006, 2010, 2011, and again this year."