The Halloween decoration that's sweeping the Internet today is a carved-pumpkin tribute to rapper Rick Ross. Ross, who calls himself, "The Boss," has been known to wear a giant diamond pendant representing his own face, complete with distinctive beard and sunglasses. It was that image that inspired Seattle-based furniture-designer/bike-builder/music-remixer/DJ Kristjan Olsen to turn Ross into a rap-o-lantern for the holiday. 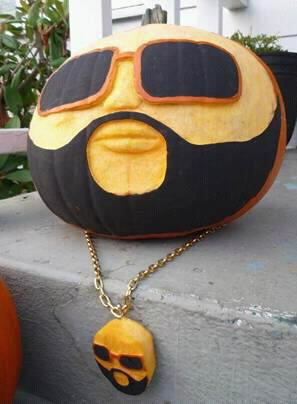 "It was definitely his chain that gave the idea. Plus my love for the man. The myth. The legend. The boss," says Olsen, who posted a picture of Pumpkin Ross on his own Armed Snobbery blog on October 23. That day, his post got two comments. Today, his squash art is everywhere, including major websites such as Mediatakeout.com. "I kinda had an idea it would go viral," Olsen writes in an email. He says he isn't overly concerned that many websites have failed to give him credit for his seasonal decoration. He benefits in another way: "I get to laugh at that stupid thing every time I walk in the front door."