Stunning photographs of an extremely rare albino ruby-throated hummingbird have been captured in a backyard in Staunton, Va.

The still shots were taken on Aug. 16 by a family of photographers who publish Nature Friend magazine.

"Setting up a flash wasn't even an option," Kevin Shank told The Huffington Post. "With the bird being so unique and rare, we didn't want to do anything that might encourage it to disappear."

Located just 30 miles from the Shank family home, they first heard about the bird on an email list-serve for the bird community, Shank explained. After they got permission, they drove over to the residence where the bird was first spotted and began shooting photos.

Of the 330 hummingbird species found around the globe, the ruby-throated hummingbird is one of the most common in North America.

But experts say the fair-feathered variety are more easily visible to predators and susceptible to disease thanks to the genetic mutation. These weaknesses help make the albino bird all the more rare.

Can't get enough? Take a look at these eye-catching photos capturing the wonderful world of hummingbirds.

Check out the breathtaking images of this unique albino-ruby throated hummingbird below. 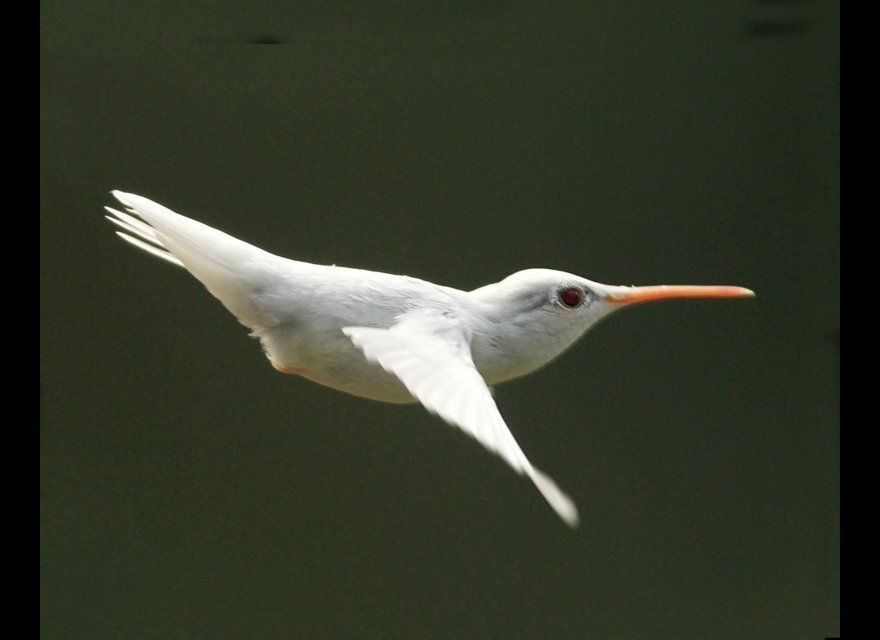 1 / 8
Albino Ruby-Throated Hummingbird
While taking his turn at one of the family cameras, nine-year-old Allen Shank captured this shot of an albino ruby-throated hummingbird. The Shanks were at a home in Staunton, Virginia on August 16, 2011, when Allen captured this photo. The camera Allen was using was a Canon 7D camera with a Canon EF 400mm f/2.8 L IS lens. <em>To see more great pictures of the hummingbird visit <a href="http://www.naturefriendmagazine.com/index.pl?linkid=62;class=gen" target="_hplink">Nature Friend Magazine</a>. </em>
Allen Shank, Nature Friend Magazine