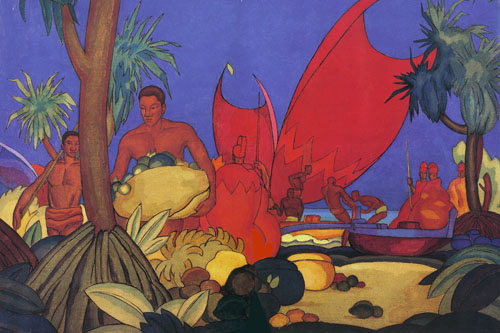 It has been reported that a group of seven rare oil paintings by Arman Tateos Manookian (1904-1931) was removed from the historic Hotel Hana-Maui earlier this year. The paintings, which depict images of early Hawaiians and the arrival of Captain Cook, were first purchased from the artist in 1929 by Helene Fagan, the wife of Hana Ranch Founder Paul Fagan Sr.

Several of the Hana paintings were originally on display at the "Green Mill Grill" on Honolulu's Bethel Street, where Mrs. Fagan saw them one night in 1929 after viewing a performance at the Hawai'i Theatre across the street. Mrs. Fagan's cousin, Alice Bowen Spalding, the manager of Gump's Gallery on Kalakaua Avenue on Waikiki, gave the artist his first and only one man show in 1929. 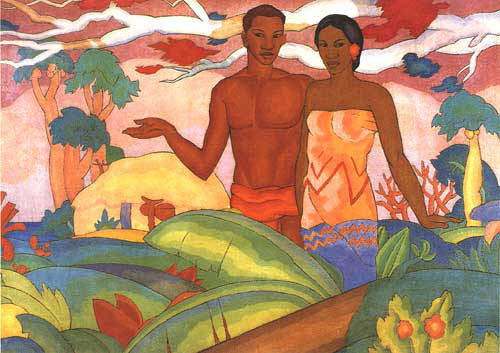 Arman Manookian (1904-31) "Hawaiian Boy and Girl," 1928, one of the paintings recently removed from the Hotel Hana-Maui

Considered daringly modern when they were first shown, the bold canvasses were originally displayed in the Fagan's Pu'u O Hoku Ranch on Moloka'i along with Polynesian style furnishings. They have been on display in Hana since 1947 when Paul Fagan opened the original 6 room Ka'uiki Inn to attract tourists to the remote coast. For many years, three of the largest paintings were displayed in the dining area, high on its woven lauhala walls, where generations of honeymooners dined beneath them. When the Fagan family sold the later Hotel and surrounding lands in 1968, the paintings were included in the sale. 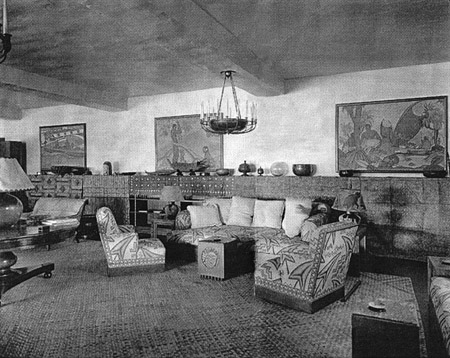 Manookian paintings including "Red Sails" in the lodge of the Fagan's Pu'u O Hoku Ranch, Moloka'i, circa 1934-7

This isn't the first time that rare items have been removed from the Hana-Maui since the original sale. After purchasing the Hotel in 1984 the Rosewood Hotels Group removed the historic 225 piece Paul I Fagan Sr. rifle collection from the hotel's Paniolo Bar. The collection is now reportedly displayed in the Dallas offices of billionaire Nelson Bunker Hunt.

For a number of years the Manookian paintings were neglected by the Hotel's owners, who did not understand their importance. In the 1980's one canvas hung in the employee dining room over a steam table, flecked with dried rice and gravy. When the Hana-Maui was purchased by San Francisco based Passport Resorts in 2001, the Manookian paintings -- newly cleaned and restored -- were used by architect/designer Hunton Conrad in 2002 as the inspiration for the colors and design motifs of the renewed interior. 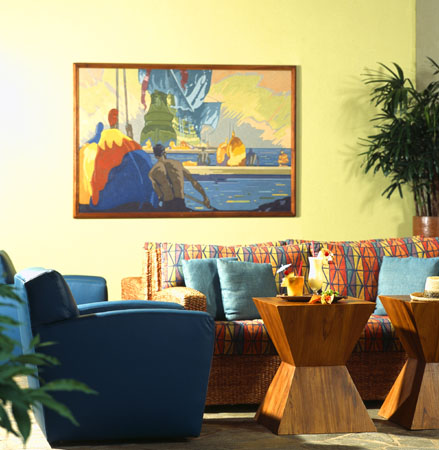 A painting in the style of Manookian, depicting the Spanish in Hawaii, as it was displayed at the Hana-Maui after a 2002 renovation. The colors of the adjacent walls and fabrics were inspired by the hues of the canvas. Photo by Tony Novak-Clifford

The Hana Maui, facing declining revenues in a recessionary economy, has changed hands twice in recent years. In 2008 Passport Resorts LLC sold it to the Ohana Hotel Company, a subsidiary of Vermont based Arden Grove Hospitality . In May of this year, it was again sold to Denver based Amstar Group LLC. A source in Hana states that prior to the most recent sale, the Manookian canvases were ordered removed by Mr. Roy Goble, Managing Partner of Ohana.

After a concerned resident of Hana notified the director of the Honolulu Academy of Art about the impending sale of the paintings several trustees informally formed a group to attempt to purchase all seven, hoping to keep them in Hawaii. This group effort ultimately did not go forward. An appraiser present when the works were being removed states that three were sold on the spot. It is not known which three were sold, or to whom.

Mr. Goble, the President of Goble Properties, based in Pleasanton, California, did not respond to a phone request for information about the removal and sale of the paintings. In January of last year a Wells Fargo banker circulated images of at least two of the Hana Manookians to mainland dealers requesting information about their retail value.

The removal of the seven Manookian paintings, among the finest of the less than thirty known paintings by the fiery Armenian born artist, represents a significant cultural loss of Hawai'i, where his paintings are considered iconic. Manookian, who took his own life in 1931, was a survivor of the Armenian Genocide who came to Hawai'i as a member of the Marine Corps. Manookian once told a friend that his goal as an artist was to create a "symphony of color."

In 2005, a large Manookian painting from a Honolulu collection was sold in a private transaction for a reported $500k, igniting new interest in the artist's work by dealers and collectors. Although the current recession has softened the art market, each of the Hana Manookians could still certainly command prices in the six figure range.

In April of 2009 the Hawai'i House of Representatives passed a resolution, which mentioned Manookian as a "gifted painter" and a "genocide survivor," making April 24th Hawaii's official "Day of Remembrance in Recognition of and Commemoration of the Armenian Genocide of 1915."

The Hana canvasses were the last examples of Manookian's work on permanent public display anywhere in the world. The Honolulu Academy of Art owns one Manookian, but it is not currently being shown. A local collector does intend to loan at least two Manookians to be displayed in the near future. A group of murals that the artist painted for the Waipahu theater just before his death were covered over and destroyed when the Waipahu became an adult theater in the 1960s. 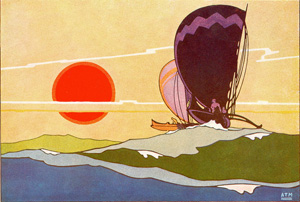 Arman Manookian (1904-31) "Early Hawaiians," one of the paintings recently removed from the Hotel Hana-Maui

"Art springs from the wild and anarchic side of human nature; between the artist and the bureaucrat there must always be a profound mutual antagonism, and age-long battle in which the artist, always outwardly worsted, wins in the end through the gratitude of mankind for the joy he puts into their lives."

- A quote from the notebooks of Bertrand Russell, marked by artist Arman Manookian and spoken at his memorial service by Arthur Greene in May of 1931

Since this blog was published, I have continued to follow this story, and want to report a few developments. First of all, it was brought to my attention that several of the paintings hanging at the Hana Maui were not authentic Manookians. Several of them, including "Early Hawaiians" were painted in the 1950's by artist Larry Mayo, who used images from "Paradise of the Pacific Magazine" to create Manookian lookalikes at the request of the hotel's owners. I can also report that two of the authentic Manookians -- now in the collection of John and Patty Dilks -- will be on display at the Honolulu Academy beginning in November. The paintings are "Hawaiian Girl and Boy" and "Red Sails." Both paintings have been freshly cleaned.