Biologists are buzzing about a dramatic new photo showing what's being called "the first record of a thresher shark giving birth."

Published online Dec. 23, 2014 in the scientific journal Coral Reefs, the remarkable photo was taken by Australia-based photographer Attila Bicskos while diving in the Philippines. It shows the body of a baby shark just as it starts to emerge from its mother's body--and the photo was almost discarded before anyone knew what it showed.

"That picture ended up in my trash folder because it appeared to have a 'blob' on it which I thought was a jellyfish," Bicskos told The Huffington Post in an email. "As it was I didn’t have a good profile shot so I revisited my trash folder and looked more closely at what I had. Even after I had stared at it for some time I couldn’t reconcile it was a birth, I guess it was just too far-fetched for that." 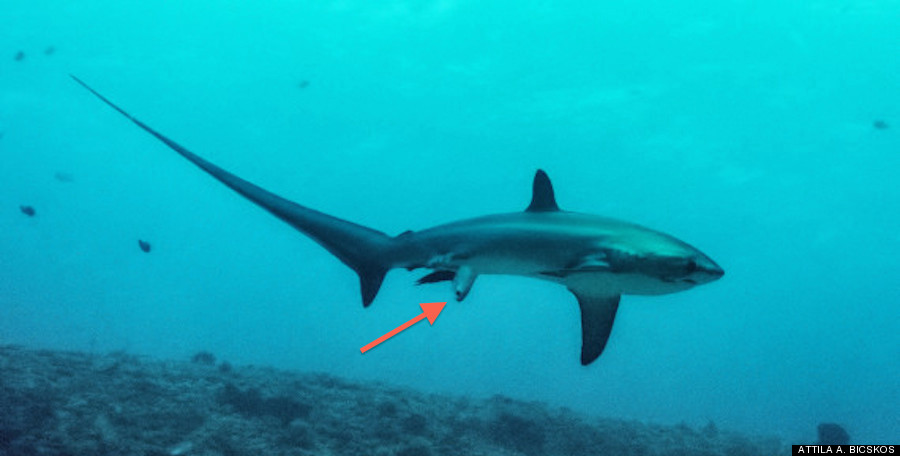 The photo of the shark, with red arrow indicating the emerging pup.

The shark was swimming at a marine "cleaning station," where wild sharks congregate to let smaller fish remove parasites and dead tissue from their bodies.

"It looks like this area is not just a cleaning station, which is already massively essential, it's also serving as a pupping ground," Dr. Simon Oliver, a researcher at the University of Chester in England who authenticated the photo, told BBC News. "We've seen lots of [pregnant] females there, so I don't think this is a one-off."

But the photo may be just that!