If you ever wondered what it was like to dine aboard the Titanic, here's a glimpse. Two rare menus from the doomed vessel were sold at auction this weekend for an astounding $160,450 total. 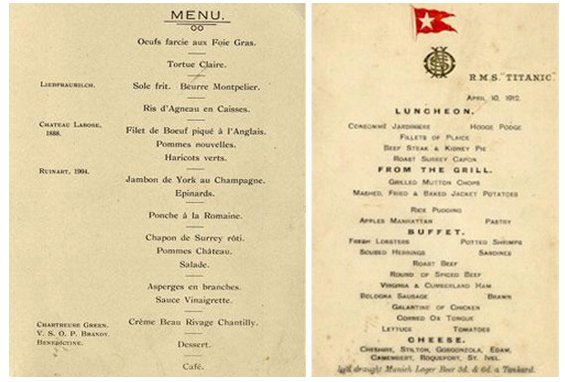 They each went for world record prices; a lunch menu served to first class passengers for about $102,000 (£64,000) featuring items like lobster and roast beef, and another menu for a VIP 12-course luncheon for $58,000 (£36,000) that included dishes like foie gras-stuffed eggs, turtle soup and Sussex capon. The latter also details a drink called Ponche at la Romaine, a palate cleanser made with lemon water ice, Champagne and rum.

According to the auctioneer, Henry Aldridge & Son, the VIP menu is one of only a few that survived to modern day. About 69 dignitaries were in attendance at the meal, which was held at the Grand Central Hotel in Belfast prior to Titanic's departure.

Both menus are thought to have belonged to Richard and Stanley May, two brothers who were travelling to Cork for a fishing trip and crossed the Irish Sea on the Titanic, offloading before its fateful sinking.