Denise Ginley took some horrifying photos of a bloated, dead animal this weekend. "Is this another incarnation of the Montauk Monster?" she asked Gothamist. "Or just the biggest rat in the city?"

(See below for an update on the mysterious creature)

Ginley was going for a stroll Sunday when she made the grisly discovery. She told HuffPost via email:

"We were walking on the esplanade along the East River beneath the FDR. We found the dead creature lying on the strip of sand beside the East River, on the Manhattan side, directly beneath the Brooklyn Bridge. It looked like the tide probably washed the carcass up there along with some driftwood."

[SCROLL DOWN FOR GRAPHIC PHOTOS]

If the animal was indeed a rat, it wouldn't be the first time a giant rodent has been spotted in New York City. (See: Foot Locker and the Marcy Houses.) And if it was not a rat, it's not the first time a bloated, dead creature has confounded the region.

The "Montauk Monster" was discovered in 2008 on a beach in the Hamptons, and the "stout, hairless creature with a beak, claws," and "almond-shaped eyes familiar from renderings of space aliens," is a source of mystery to this day. An escaped mutant from a government lab? A dog? A pig? An unknown creature? Viral marketing campaign?

Or if this bro is telling the truth, it's a dead raccoon pushed out to sea and set aflame during an impromptu Viking funeral.

UPDATE: While a spokesperson for the Parks Department believes the animal was a "cooked pig"-- of which the Department's since disposed-- Paul Curtis, an animal expert told Gothamist:

The best guess looking at body conformation and dentition, is this was likely a small dog that drowned and has been floating in the river for quite a while. It is obviously bloated, and all the hair has slipped off the carcass. The Montauk monster that washed up on LI... that was determined to be a bloated raccoon carcass. The teeth in this case look more dog-like than raccoon-like to me. It’s tough to confirm the species from the photos without the jaw in hand to examine the teeth in detail.

All photos courtesy of Denise Ginley: 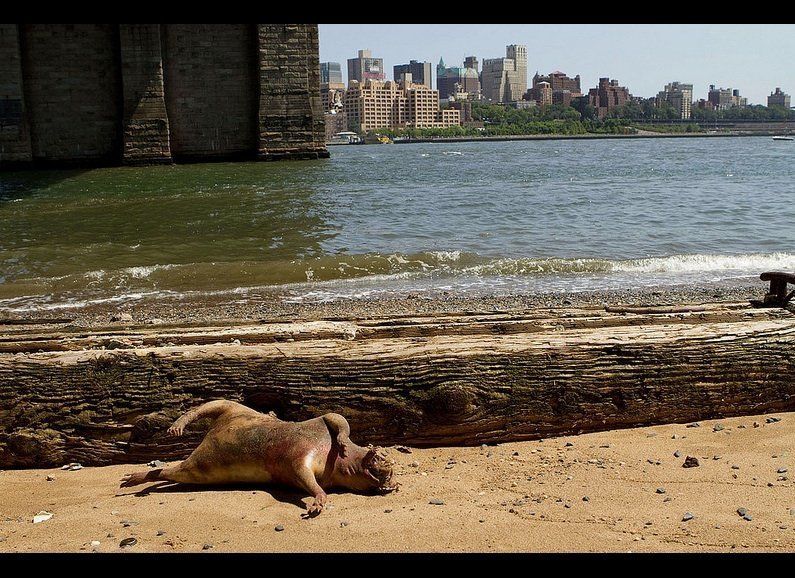