West Virginia is the state with the highest rate of death from injuries, such as those sustained in car crashes, falls, fires and drug overdoses, while New York has the lowest rate, according to a new report.

Researchers analyzed information on death rates from injuries — both intentional and unintentional — in all 50 states and Washington, D.C., between 2011 and 2013. 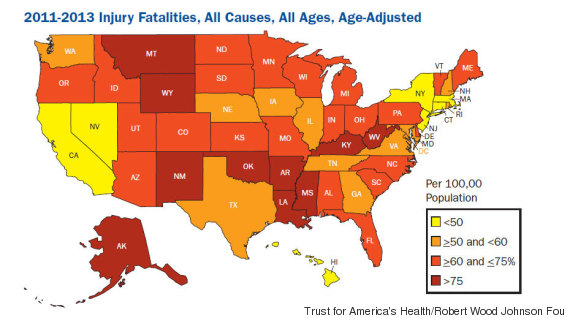 A map from the report, courtesy of the Trust for America's Health/Robert Wood Johnson Foundation.

Although everyone can take steps to stay safe, studies show that public health strategies — such as legal requirements for seat belts, child-safety seats, bike helmets and sobriety checkpoints — can save lives, according to the report, from the Trust for America's Health, a nonprofit health advocacy organization. The report makes a number of recommendations for policies to prevent deaths from injuries.

"Injuries are not just acts of fate. Research shows they are pretty predictable and preventable," Jeffrey Levi, executive director of TFAH, said in a news conference today (June 17). "This report illustrates how evidence-based strategies can actually help prevent and reduce" injuries and violence, Levi said.

Success with public health policies and education campaigns to prevent injuries "can help give Americans the tools they need to stay safe and protect their families," Levi said.

Particularly concerning are deaths from injuries that occur during drug overdoses, which have more than doubled over the past 14 years, and now account for 44,000 deaths in the United States yearly, the report said. About half of these are related to prescription drug overdoses. In 36 states, there are now more deaths from drug overdoses than there are from car crashes, according to the report.

The report recommends that states mandate the use of Prescription Drug Monitoring Program systems, which are databases that doctors use to record and track patients' prescriptions. These can help identify patients who "doctor shop" for prescription drugs, according to the report.

The report also scored each state, on a scale from 0 to 10, based on 10 criteria that are considered important for preventing injuries and violence, such whether the state had seat-belt laws, required that children wear bicycle helmets or that convicted drunk drivers use ignition interlocks (which use a breath-alcohol test before a car can start), and required prescription drug monitoring programs for some health care providers.

Only one state, New York, scored a 9 out of 10. Twenty-nine states scored 5 points or lower, and four sates (Florida, Iowa, Missouri and Montana) scored just 2 points.

"This report provides state leaders and policymakers with the information needed to make evidence-based decisions to not only save lives, but also save state and taxpayers' money," said Amber Williams, executive director of the Safe States Alliance. "The average injury-related death in the U.S. costs over $1 million in medical costs and lost wages. Preventing these injuries will allow for investments in other critical areas including education and infrastructure."

Copyright 2015 LiveScience, a Purch company. All rights reserved. This material may not be published, broadcast, rewritten or redistributed.
25 Simple Ways To Get More Steps In Your Day
More:
healthy living
Newsletter Sign Up
An essential daily guide to achieving the good life
Subscribe to our lifestyle email.
Successfully Subscribed!
Realness delivered to your inbox