Last night, because Matt was out of town, Grace asked to sleep in our bed. I was hit with a wave of how much longer will she want to do this? and said yes, of course. So she was lying next to me when the phone rang at 5:30 this morning. I fumbled for the phone, instantly nervous, wondering what was wrong. It was an automated recording from school saying that school was cancelled. She was awake so in the near-dark I whispered that there was no school and to go back to sleep.

"Why?" she sat up fast, eyes glowing, nervous.

"I don't know, but don't worry. Everything is okay." I lay back down and waited for her to fall back asleep, knowing that if I got up she would too. If we don't have school, maybe I'll take the kids to the Town Diner, I thought. We live in Cambridge and have been in this house since the kids were born. The Town Diner, about a mile away in Watertown, is our favorite place to have breakfast. Once I felt her even breathing and was sure she was sleeping again, I crept out of bed and up to my desk.

I opened Gmail on my laptop and wrote to my husband: "School is cancelled. Any idea why?" And then I turned on my phone. It lit up like a Christmas tree. I went to CNN and saw what had happened overnight. Aware that I only had a little bit of time before the kids woke up, I turned on the television.

Of course Whit chose this morning to wake up early. Reluctantly I turned off the TV and tried to piece together the events through Twitter, Boston.com, and texts with friends. Sitting in my third-floor office, while Whit played with Legos in the next door room, I could hear sirens. The phone did not stop buzzing. Grace woke up too, wandering upstairs with bedhead, asking why there wasn't school.

"I want to talk to you guys," I said, sitting cross-legged on our tan couch in the family room. This room is a mess, I thought, noticing the Legos scattered all around. I shook my head and looked up at each kid, seated on either side of me, in turn. I didn't even hesitate before telling them that the two suspects had been found, that one had been killed in an early morning shoot-out with the police, and that they were trying to find the other one, who had gone on the run.

"Are we okay?" Grace's face was etched with fear. I explained that the police were ALL OVER this, and that they were taking this very, very seriously. Whit just wanted bacon for breakfast. So I provided that, rushing them a little in my hurry to get back to the news.

"Yes, we are okay." My desperate desire to know what was going on went to war with my even stronger wish to keep my kids calm. I took a deep breath and tried not to glance at the phone which kept on buzzing. I could feel Grace's eyes on me. She wasn't buying this at all. "Guys. I promise. We are safe here. We really, really are." This I do believe. This I can say without any reservation.

Suddenly I had an idea. "You know how you have been wanting to go on Pottermore?" They have been agitating for days to check out Pottermore, the website about Harry Potter. "Let's do that!"

I sat with them and helped make a Pottermore account, feeling my phone buzzing in the pocket of my jeans as I did so. The temptation to check it was overwhelming. No. Set them up at Hogwarts. This is the perfect place to spend today. Then I felt a rush of fierce desire to also spend the day with Harry Potter, in Hogsmeade, at Hogwarts. Anywhere but here. But I can't.

Once they were immersed in Pottermore, I ran back to my office. I pulled up CNN, Twitter and my email. I put headphones into the computer and listened to NPR. Every few minutes I glanced into the family room to watch the kids, sitting side by side and riveted by Harry Potter and his friends. The rest of the time I sat in my office in a widening pool of bewilderment, thinking about the two suspects, one of whom looks like a mere child in the most recent photograph, thinking about the fact that they lived here, went to school here. Wondering what kind of world my children are growing up in.

I thought about my blog post yesterday, about the conversation I had had with Grace on Tuesday morning in which I had said: we cannot be afraid. If we are afraid we let them win. And yet, right then, all I felt was fear. Not fear for our own lives, but fear because I felt as though the dark, cold feathers of evil had just brushed past us.

I heard Grace exclaim, "I figured out how to do that spell!" and then, a few minutes later, Whit say, "I'm playing Quidditch!"

I'd rather live in that world. 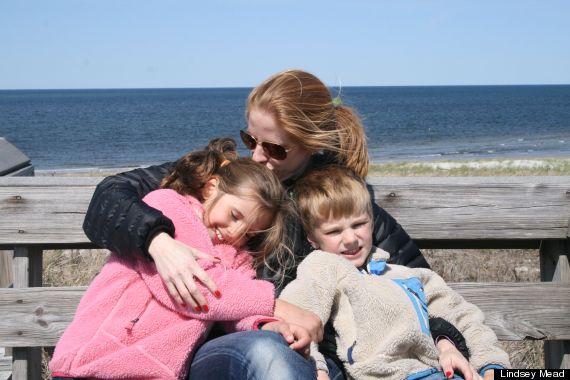 HuffPost Readers: Were you or someone you know in the area affected by the bombings or the manhunt? If you have any information to share, or want to tell us what you experienced, email openreporting@huffingtonpost.com. Include a phone number if you're willing to be interviewed. Let us know if you wish to remain anonymous.

More:
parents-kidsharry potterPottermorecambridgeParents
Newsletter Sign Up
Raise the kind of person you'd like to know
Subscribe to our parenting newsletter.
Successfully Subscribed!
Realness delivered to your inbox