As part of our Bearing Witness 2.0 project, the Huffington Post is rounding up local stories of formerly middle-class families who are now struggling to stay afloat. If you or someone you know has a story to tell, please e-mail me at LBassett@huffingtonpost.com.

Neck deep in the recession, many formerly middle-class families have had to find creative ways to cope with the sudden loss of their jobs and homes.

After Jeff Falk, 51, lost his family business selling auto parts, he found himself two months behind on the mortgage and unable to find work. No longer able to afford the comfortable house he had built for his family in Arkansas, Falk, his wife Jill, and their two boys, ages 3 and 8, packed all their belongings into their 40-foot camper and headed to Arizona for the winter.

Jill found a part-time job waiting tables, and Jeff found occasional work repairing old boats, but they struggled to feed and home-school their young boys. Occasionally, Falk says, he feeds his children rattlesnake that he caught near his camper.

"We didn't have any food," Falk said. "While Jill would go out at the food banks, I'd feed the kids whatever I could find. Atypical depression-era shit. There was a big western diamondback come slithering through the camp, so I barbequed him up. It tastes like lobster. I told my kids it was desert lobster."

Falk sent HuffPost a picture of the snake: 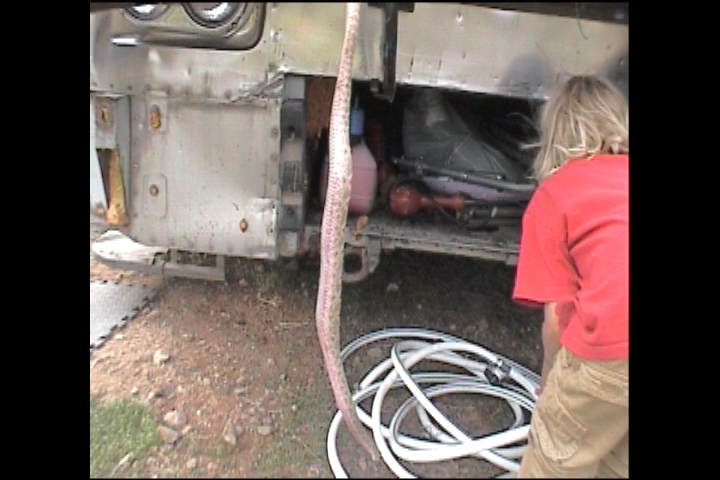 While Falk, his wife and his children have managed to stay positive throughout their financial hardships, he says the hardest part of falling out of the middle class is losing the respect of those around him. "There are two kinds of people," he said. "Those that turn and look the other way and don't even wanna look at you, and those that reach out and help you, and it seems like there's no in-between."

Stephen Mooney of Naperville, Ill., also knows what it feels like to be judged for his financial circumstances. Mooney, 33, was laid off in October 2008 from a job at a marketing research company that he had held for 10 years. When his severance pay ran out several months later, he and his wife Marianne were unable to pay their utility bills.

"Our gas was shut off," Mooney told HuffPost. "We were taking showers with water that we would heat up in the rice cooker and microwave. It was very depressing. Going to a job interview, you may be wearing a shirt and suit, but you don't feel clean. I looked unkempt all the time, and corporate America's not an easy place. There were some places where I knew I didn't have a job as soon as they saw me sitting in the lobby."

To make matters worse, the Mooneys' house was recently foreclosed, and they have been asked to leave by March 1. "I don't know how we put all the pieces back together," Mooney said. "Where do we live? Where does all our stuff go? It's going to be very strange."

Many families who are facing the loss of their homes and utilities have had to make some difficult decisions to stay afloat. Kimberly Rios of North East, Maryland said she sold her wedding ring on Craigslist last weekend in order to cover utility bills.

"This is no joke, please be a serious buyer," Rios wrote in her ad. "It is too cold for us to be without electric and heat so if you have been looking consider my deal."

She told HuffPost that she sold the ring on Valentine's Day. She is trying to decide whether to use the money to pay for a few weeks of electricity or to buy a cheap car so that she and her family of six will have a place to go when the foreclosure happens.

"Directly after [selling my ring], I had to go to the bathroom and pretend I was taking a shower so I could cry without upsetting everyone else," Rios said. "I mean, how selfish of me to cry about a material thing. I just felt like it was the last piece of what little I had left. I came out smiling as usual and tried to get my husband and daughter excited that this was a good thing."

Rios says that her oldest children, Kristen, 21, and Matthew, 22, have both dropped out of community college to work full-time, and her 17-year-old daughter Elizabeth is considering dropping out of high school to join the military.

"We can't afford a prom dress, graduation cap and gown, much less any of the yearbooks or other things she has missed," Rios said. "She is also humiliated that she now gets free lunch and that when we go anywhere, we walk or take a taxi. We live in a small town and people we know have noticed the changes. In our appearances, our circumstances and general depression of our family."

But in spite of all the humiliation and sacrifices, Rios remains positive about her family's future: "At least we have each other. I would never get through this without all of them. I do have faith that things will get better if we do what we always do: keep our heads up, have a positive attitude and work hard."