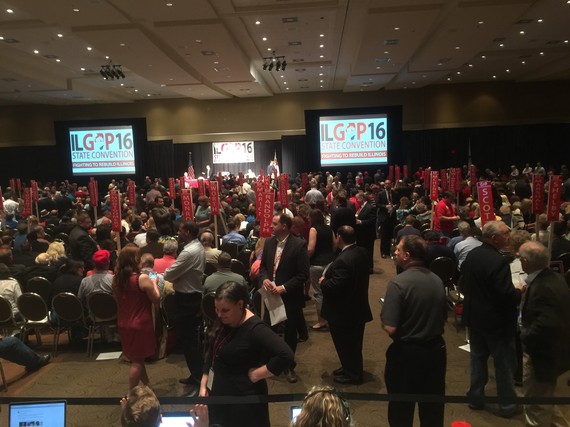 PEORIA -- As I left the 2016 Illinois Republican Party convention Saturday, I couldn't decide if I had just witnessed the death knell of the once mighty state GOP or the earliest spark of its resurrection.

After weeks of turmoil over the prospect of Donald Trump becoming the leader of its ticket in November, the party fully embraced its presumptive candidate for president. "Hillary for Prison" was a common refrain around the Peoria Civic Center, where 978 delegates and many other party faithful gathered for a big show of unity eight weeks ahead of the Republican National Convention in Cleveland.

Even Gov. Bruce Rauner, who previously had said he would neither endorse Trump nor attend the Republican National Convention at which Trump is all but assured of the nomination, managed to imply his support without stating the candidate's name.

"What we can't do is let Hillary Clinton get in the White House. No way Hillary Clinton is getting elected," Rauner said to huge applause after urging party unity "up and down the ticket."

Illinois Republican Party Chairman Tim Schneider, conceding that Trump had not been his favored choice in the March 15 Illinois primary, noted that "the people have spoken" and now it was time to get behind Trump.

As Trump took the country by storm in victory after victory in state Republican primaries, he showed that this is an election in which conventional wisdom would not apply. If it did, Trump would have been out of the race long before primary season got under way.

If this convention-defying trend continues, Saturday's mass bear-hug for the billionaire candidate might one day be remembered as the moment at which the Illinois Republican Party began its resurrection. Conventional wisdom has presumed ever since March 16 that Trump atop the ballot in blue state Illinois would be a disaster for Republicans in contests down the ballot.

Conventional wisdom holds that Illinois Democrats generally turn out in greater numbers in presidential years, and they'll be even more motivated to get to the polls Nov. 8 both to vote for Hillary Clinton and to guard against any chance of Trump ending up in the White House.

That conventional theory was forged in the weeks immediately after the Illinois primary, when the shock of Trump's victory in a state known for moderate Republicans like Sen. Mark Kirk still was fresh. Back then, the national Stop Trump movement was formidable, as Republicans -- what we now call "establishment Republicans" -- recoiled at the idea of the blustering Trump being their presidential nominee.

A scant seven weeks later, the Indiana primary results made it clear that Trump was rolling and would not be stopped.

"We've got a gentleman at the top of the ticket who's brought enormous numbers of people out in the primaries," Schneider said after Saturday's event.

Now those who feared Trump's potential negative effect atop the ticket say they relish his presence. Rather than dispirited Republicans staying home on Election Day, they see an energized base eager to keep Hillary Clinton out of the White House showing up in record numbers. That, of course, would be good also for the many Illinois House and Illinois Senate Republican candidates trying to end the Democrats' super-majority control of the Illinois Legislature.

The numbers do not favor this theory. In the March 15 Illinois presidential primary contests, there were a total of 2.06 million Democratic ballots cast to slightly less than 1.45 million GOP ballots. That's roughly a 60-40 split with Democrats on top. Those numbers are low because primary turnout always is lower than that of general elections. But general election turnout in the last two presidential elections heavily favors Democrats as well. In 2008, Barack Obama defeated John McCain 3.4 million to 2 million (62 to 37 percent). In 2012, Obama defeated Mitt Romney 3 million to 2.1 million (58 percent to 41 percent).

It's going to take a massive wave of energized new voters eager to support Donald Trump and the rest of the GOP ticket for the Republicans' ideal scenario to play out. That will require a major drive to get more likely Republican voters registered.

And if that doesn't happen? If Trump continues his tendency to say ever more bombastic things long after his nomination in Cleveland in July? If the voter repulsion that pundits predicted would have arrived long ago finally arrives in the fall?

Then I may have witnessed the party on Saturday embracing the man who could single-handedly bring it one of the worst elections in recent history.

But there I go again with my conventional thinking.