As a candidate, Bruce Rauner claimed his billion-dollar success in private equity qualified him to run state government. But in the words of former Governor Jim Edgar, Rauner's path to profit was, "You buy a business, you tear it apart and you sell it. ... I don't think you're going to tear apart the state and sell it. He might want to, but you can't do that."

Unfortunately, Edgar's counsel hasn't dissuaded Rauner from unleashing on Illinois the same tactics that served him so well in the rapacious corporate world. His firm looked to take over troubled companies or those least able to fight back, like nursing homes for the frail elderly or group homes for the severely disabled. And they did it largely with money from public pension funds, hiding their high fees and questionable business practices behind an iron curtain of secrecy.

Rauner's first year as governor has been marked by the same brute tactics. State government has gone six months with no budget and millions of citizens are suffering as a result, all to leverage pressure for what he calls his "pro-business" Turnaround Agenda. 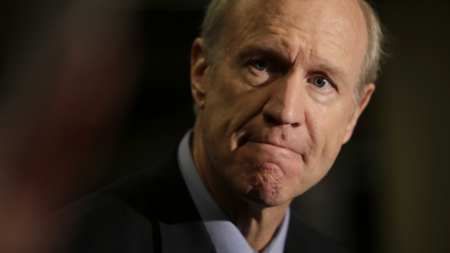 But what exactly is that agenda? A moving target, it has changed repeatedly since his inauguration. Most recently it appears to include freezing property taxes by eliminating 'prevailing rate' policies in public construction projects, taking collective bargaining rights away from local government employees, cutting workers' compensation benefits for people injured on the job, instituting term limits and changing the way legislative districts are drawn.

Rauner claims his "reforms" will grow the economy and create more jobs, but the facts tell a different story.

Columnist Rich Miller did the math to show that eliminating the prevailing wage would likely cut property taxes by only 0.74%. Yes, there's a decimal before that 74--a reduction of less than 1%.

Meanwhile, workers' compensation costs are already on their way down, without any help from Rauner. A new report shows that Illinois medical claim costs dropped 15% over the past year, the biggest decline of the 17 states surveyed and a much steeper drop than Indiana or Wisconsin.

Nor does the slightest evidence suggest that stripping public employees of their collective bargaining rights would aid economic growth. Even a glance at states where public workers aren't free to form unions shows that Illinois has higher employment and family incomes than just about every one of them.

In sum, driving down wages and limiting workers' rights won't make our state more prosperous for anyone but corporations and the wealthy who are already doing just fine. To the contrary, middle-class workers would have less money in their pockets, less spending power in their communities, and less say on the job.

None of this is good for business. Companies want stability, not the chaos Rauner is courting. They want sound infrastructure--the kind that well paid, union-represented construction workers produce--as well as high-quality schools and a well-educated workforce. And they want customers with money to spend. That's why companies like Oscar Mayer and SC Johnson are moving from Rauner's model state, Scott Walker's Wisconsin, to our own Illinois.

Yet Rauner continues to hold the budget hostage to his demands. As a result, seniors faced massive cuts in home health care and other life-sustaining programs. Tens of thousands of families have been denied childcare assistance. Programs for kids with autism and epilepsy are starved of resources. Domestic violence shelters are forced to cut services or even close their doors. Early intervention programs for children with disabilities are disappearing. Supports for victims of rape and other crimes are in jeopardy.

And Rauner appears to be deliberately targeting certain programs and regions, cutting off funding for local government 911 emergency services, shuttering the Illinois State Museum sites, closing the Sparta shooting complex and the Hardin County Work Camp, and eliminating the jobs of conservation police officers who protect our state parks and the people who use them.

State universities face an ever-deepening crisis. More than 130,000 students who rely on the MAP grant program are in limbo, not knowing whether they'll have the assistance they need. Universities themselves are struggling to meet payroll, with many considering massive tuition increases or hundreds of layoffs. The Wall Street agency Moody's downgraded their bond ratings, making it harder to borrow the money needed to keep operating.

And then there's Rauner's effort to bring the hammer down on state employees, in effect forcing them to make the biggest contribution to Illinois' budget fix via huge hikes in their health care costs. State contract negotiations have become a pitched battle, with workers defending the vital public services they provide and the economic security they've fought hard to achieve.

Where will it all end? Will our state continue in its death spiral, driven down by Governor Rauner's bizarre patchwork of non-reforming reforms? Or will common sense and basic decency reassert themselves and set us all on a better course?

All working people have an important part to play in helping to shape the answer. By coming together in a broad coalition of all those who want to forge a positive and productive future for our state, we can help turn the tide against the Turnaround.