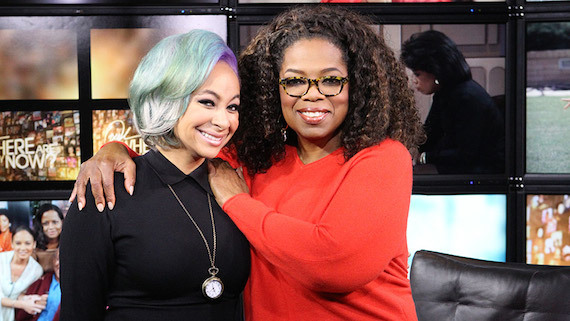 Photo credit: Oprah: Where Are They Now?

Last week entertainer Raven-Symoné appeared on Oprah: Where Are They Now? and proudly stated that she was in "an amazing, happy relationship" with a woman, yet what she followed up with turned out to be more surprising for some. After telling Oprah that she did not want to be labeled "gay" yet simply as "a human who loves humans," Raven continued: "I'm tired of being labeled. I'm an American. I'm not an African American; I'm an American."

As Oprah shook her head, she responded, "Oh girl, don't set up the Twitter on fire." She then threw up her hands and yelled jokingly, "Stop, stop, stop the tape right now!" Twitter and the blogosphere certainly did blow up in response to Raven's remarks, which many felt were blasphemous, not regarding her sexual orientation, but because she rejected being identified as African American.

Everyone has the right to identify as they please, and if she wants to, Raven-Symoné can certainly refuse labels surrounding her sexuality and ethnoracial background. However, she didn't dodge all labels as rigorously as she claimed, for Raven still enthusiastically and without hesitation embraced the national label of "American."

What might be more problematic is that Raven and Oprah both came to agreement on the point that "America" is supposed to be a "melting pot." While their version of the "melting pot" may be that everyone is equally included in the melding of cultures that make up the United States, this has not been the case in the past and is still not the case today. (If we truly considered every culture as equal contributors to the U.S. "melting pot" then why in 2014 do we still have a sports team called Redskins and continue to celebrate Columbus Day as a national holiday?)

Oprah and Raven-Symoné are two models of excellence who deserve recognition for their achievements in media, entertainment, and life. Still, their recent conversation concerning ethnoracial identity and what it means to be "American" may have been misdirected in places and requires further discussion. These revealing comments provide us with a place for further conversation as we reflect on our views concerning the important topics of race, culture, and identity.

"I never said I wasn't black"

So, did Raven-Symoné--our once beloved little child star from The Cosby Show and That's So Raven--really come to Oprah years later only to turn in her "black card"? Apparently not, for in the days after the social media fallout Raven released a clarifying statement to appease the masses: "I never said I wasn't black... I want to make that very clear. I said, I am not African-American."

For some, these words are even more confusing than her original comments, since at first Raven seemed to want to throw away labels of race and sexual orientation, but later claimed the racial term black while standing by her rejection of the ethnocultural term African American.

While Raven never expected her personal comments would "spark such emotion in people," those claiming mixed descent need to understand that speaking openly about their blended heritage can still be controversial, especially when they are perceived to be favoring their mixture over an identity of color.

When Raven-Symoné said, "I have lots of things running through my veins" she was being honest about her ancestry further back on her family tree. Still, some people of mixed heritage have used statements like these to distance themselves from stigmas associated with "blackness."

This is why Oprah warned Raven right away that she was "going to get a lot of flak for saying you're not African American." Raven responded that she felt close to various ethnic groups and cultures, and also noted that her roots go back to Louisiana.

While the history of ethnoracial mixture in Louisiana is much more complex, certain Louisiana Creoles are known for their mixed African, European, and Native American background. What Raven may not have known was that years ago some of these families routinely separated themselves from darker-skinned "Negroes" in colonial French Louisiana and after Louisiana became part of the United States.

In light of this past, Raven-Symoné's words were interpreted by some as coming from a place of privilege and power historically associated with "light-skinned" people of partial African descent who did not associate themselves with "dark-skinned" African Americans. Though it's clear this was not her intent, as she explained, "I connect with each culture."

Two centuries ago, many privileged people of mixed heritage would not have said the same thing.

"A melting pot in one body"

Most of us are familiar with the idea of the "melting pot" because we were (mis)taught that the United States was intended to be a nation where people from all over the world would come together and melt into one culture. Fewer are aware that the original path to accomplish this would be for a limited population of immigrants to be assimilated into one specific type of European American culture.

Those of African, Asian, and Native American descent (including Latinos) were never intended to be ingredients in the U.S. "melting pot." This is why from the 1600s to 1967 there were laws put in place to prevent the "intermixture" of the so-called races in colonial English North America and the United States.

Oprah's dialogue with Raven-Symoné misses that the theory behind the U.S. "melting pot" was intended to erase group cultures, identities, and histories. To be American meant to become the ideal Anglo-American, those of English descent.

Many Europeans also went through a process of assimilation to become culturally Anglo-American, for many believed that swarthy Eastern and Southern European immigrants were bad for the nation. Although, Europeans outside England were eventually accepted into the "melting pot," people of color were excluded from the stew.

Even today it's not easy for those of African, Asian, and/or Native American ancestry to be fully included as "American" without first assimilating to European American culture. All this makes the idea of the "melting pot" a questionable metaphor to use when thinking about the United States (some prefer U.S. "salad bowl" since the ingredients aren't broken down and still go well together).

What it Means to be African American

Immigration for African Americans was involuntary, and as Raven-Symoné pointed out to Oprah, the majority of people of African descent in the U.S. will never be able to trace their roots directly back to a specific spot in Africa.

This seems to be what Raven-Symoné was trying to express: her heritage includes a mix of ancestries from various regions of the globe and this is what makes her "American."

When Oprah asked Raven to clarify her opposition to the African American label, Raven explained: "I'm an American, and that's a colorless person." This is where she goofed a bit on what it means to be "American." Arguably Raven should have insisted that she was a colorful person while noting her blended heritage.

In the U.S. mixed heritage is not found only with African Americans, but also with Latinos, Native Americans, and increasingly among Asian Americans and European Americans as well. Though that mixture has not always been voluntary and there are many complex histories stemming from colonization and oppression, there is still much to be celebrated.

Perhaps the bigger issue is that we often let racial terms such as "white" and "black" obscure the fact that our ethnic and cultural heritage runs much deeper than skin tones reveal.

By refusing the label "African American," Raven-Symoné and others are attempting to claim "America" as people of color and for all groups who have not been recognized for their contributions to the U.S. nation. This is important to do since all have not been fully included in the U.S. definition of "American."

Still, redefining oneself in this way needs to be handled carefully, for we miss an opportunity to deal with racism when we opt for a "color-blind" approach that ignores that race is still a problem.

Before we come down so harshly on Raven-Symoné for poorly phrased words, we might remember that she's a refreshingly positive anomaly of sorts. At 28 years old, she's survived twenty-five of her earliest years in Hollywood without a criminal record and she's "not an addict of any kind."

Judging those in the public eye for not being sufficiently informed about their comments is easy to do. However, entertainers and celebrities are not authorities on race and identity (though on hair fashion Raven gets it).

After her interview with Oprah, Raven-Symoné should be credited with getting one thing absolutely right in her follow-up statement: "I think it is only positive when we can openly discuss race and being labeled in America."

So let Raven-Symoné act and sing; let Pharrell make music; let Oprah interview them. If their comments surrounding race, sexuality, culture, or equality spark conversations that help us move to a better understanding of these and other important issues then they've done more than what's in their job descriptions.