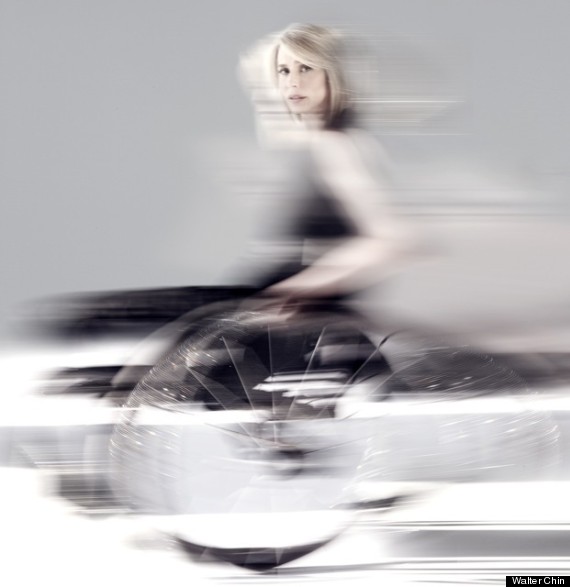 "There is not a more beautiful room in New York City tonight!" said Peter Wilderotter, president of the Christopher and Dana Reeve Foundation, to a cheering crowd of over 200 people standing or settled in their wheelchairs at Chelsea's ACA Galleries on Saturday night, September 20.

Adorning the walls of the 3,000 square feet gallery were big, dramatic portraits of 20 women living with physical disabilities, shot by 16 different photographers with credits like Allure, Essence, British Glamour, French Elle, German Vogue, American Airlines, the NY Times, the LA Times, NBC and the Target Bullseye campaign. A number were, or still are, students of the organizer of the photo shoots, Pulitzer Prize-winning photographer Ginny Dixon, who teaches at the Miami Ad School, Miami being the home of the first Raw Beauty exhibit in 2006. Beside each photo hung a short bio written by the woman, with her age, disability, and whatever details she wanted people to know about her life.

A fundraiser for the foundation, "Raw Beauty NYC" represented a partnership with mobilewomen.org, a resource and blog for women in wheelchairs founded by Wendy Crawford, the lead organizer of the event. Crawford's photo for the exhibit (pictured above) was taken by Walter Chin, who 30 years ago photographed Crawford, then a successful fashion model, before a drunk driver left her paralyzed and quadriplegic, putting a devastating end to her career.

The Project is intended "to ignite a global conversation and transform stereotypes" about women with physical disabilities, to bring women with disabilities out of the shadows and to show them not as "'victims," or as women defined by their disabilities, but as "sensual, ambitious, creative and confident." Crawford has an additional ambition: to change the definition of beauty.

In truth, the show also takes advantage of the voyeuristic propensities of able-bodied folk. "We're always being stared at anyway," Shelly Baer, a co-founder of the Raw Beauty concept and organizer of the Miami exhibit, told me. A woman who developed juvenile rheumatoid arthritis at the age of two, who admits to not looking at her body in a full length mirror until she was 30, opens her TedX talk on "The Beauty of Disability" by inviting everyone to take a long hard look, "at my small hands, short arms, and the way I walk." Those instructions--as well as the Raw Beauty Project--were the result of a shift in her thinking. Instead of doing everything she could to avoid being stared at, she decided: "Why not have them stare at a beautiful photograph?"

Among the photographs we were invited to stare at at Raw Beauty NYC was one of Danielle Sheypuk, who broke an historic barrier in February 2014, becoming the first woman with a disability to roll down the runway at New York Fashion Week; in her picture, she's boldly seated, Lady Godiva style, on a horse.

There's a dramatically bejeweled and massive headdress-wearing Angela Rockwood, creator and star of the Sundance reality series "Push Girls"; "Divas with Disabilities" creator Donna Walton, a 57-year old who lost a leg to cancer, who sports the biggest captured smile of the night; and 32-year-old Christy Cruz, who shamed the New York City Board of Education, with the help of Channel 7's Tappy Phillips, to finally make the accommodations she needed as a result of her cerebral palsy to get her GED, languidly resting in a soft white dress on a bed of grass.

There's also 64-year-old Kitty Lunn, a dancer who broke her back when she fell on ice while preparing for her first Broadway show, but never gave up, founding NYC's Infinity Dance Theater. She's pictured in her wheelchair at a ballet barre, a nice photo that's trumped by the fantastic photos on Lunn's website, of her and her company, mid-dance.

Emily Ladau is author of the blog "Words I Wheel By" and a recent New York Times piece, "One Daughter, One Mother, Two Wheelchairs, and Nothing Remarkable."

"I have always had self-esteem issues as a woman in a disabled body, and so I envisioned my photo as finally releasing that and just being natural," she wrote to me. And that is what would happen, just not exactly as planned.

Ladau's photo shoot for a disability project was delayed by inaccessibility. She was set to meet her photographer, Carey Wagner, at Penn Station and head over to the High Line to shoot. But, as Ladau reports, when she arrived, "I exited the train and discovered the elevator to leave the platform was broken." That meant finding a conductor, who had to call a staff person, who had to authorize Ladau and Wagner to get back on the train, which then had to go back to the train yard, and then back into Penn Station to another platform where the elevator was reported to be working. "The wait was about an hour, and I still had to cross through trains over to another platform to finally get to a working elevator," said Ladau.

For Wagner, an award-winning photojournalist who has covered gender-based violence in Papua New Guinea, sex trafficking in Seattle, and street harassment in NY, who "is committed to telling the stories of women who would not otherwise be heard," it was an eye-opening experience. "There is so much we don't know about what people in wheelchairs deal with, especially in a city like New York," she told me at the event.

Given that reality, some question all this emphasis on beauty and disability. As one disability rights activist said to me upon hearing of the event: "We're dependent on so many people and systems and funding streams for our very survival. We don't have enough accessible housing; there still aren't fully accessible voting machines; the health care system isn't accessible. Why are they putting their energy into that?"

Shelly Baer--a social worker herself who works with people with disabilities--agrees there is a tremendous amount to do, but it is not an either-or situation; that seems to be the case with many of the women featured at the event.

Susan Solman--one of the original organizers of the Miami exhibit, who became paraplegic at the age of 40, following surgery for a spinal cord tumor--led the recruitment and selection of the models, and coordinated the shoots; she attests to the many change-makers in the group.

"What we were looking for was what they were committed to and up to in life. We were not looking at their physical features," she said. "We were looking for women who had been able to move beyond their obstacles, who didn't become stuck." The common thread among the women selected was that they were all "up to something bigger than themselves. You could see a sense of passion in what they were committed to. It's as if they used their disability as a driving force."

Sheypuk is a clinical psychologist who focuses on helping people with disabilities to navigate dating and sexuality issues. Monique Stamps is a social worker who spent years working at an Independent Living Center, started a mentoring program for women with disabilities, and got a license to teach wheelchair Zumba.

Maggie Redden, a paraplegic polio survivor, a harpist who performed at Carnegie Hall, today helps high school students and adults with physical disabilities become self sufficient. Kelly Rouba devotes her energies to a wide variety of disability related activities, as does Michele Boardman. And Christy Cruz, in addition to working where I work, at Independence Care System, and studying for her associate's degree, founded the Young Women's Empowerment Initiative, a NYC support group to help young women with disabilities to build self-confidence, self-esteem, and independence through advocacy.

As to the future of Raw Beauty, it is the hope of all of the organizers that it spreads. If they can raise the money, they hope to bring the exhibit to rehab centers around the country. Eighty percent of those with spinal cord injuries are men, which means that in most rehab centers, there are no role models for girls and women when they need those role models most.

"I ended up six weeks in a rehabilitation hospital," recalls Solman. "You think your life is over. Then you have people come talk to you, but you can't relate to any of these people. You just want someone like yourself. I was just dying to talk to a girl....When you can finally connect with somebody, it makes a huge difference; Wendy was the first person I met."

"If we could show these photos," adds Crawford, "how inspiring would it be to newly injured people?"

Inspiring. That's a touchy word in the disability community when it comes to those of us without disabilities. A well-known disability rights activist, Harilyn Rousso, wrote a great book entitled "Don't Call Me Inspirational." But why? I asked her, when I interviewed her for Hufpo a while back. She has cerebral palsy, but has achieved so much in her life; isn't that a little bit like Ginger Rogers doing what Fred Astaire did, but backwards and in high heels?

"Inspirational is an easy reaction," she told me. What people are usually thinking when they say that is: "If you were me, you'd never leave your house and maybe even kill yourself. So I am inspirational because I haven't committed suicide--yet." Calling her inspirational "without hearing what I say or knowing who I am is just a label or a stereotype."

At the same time, it's easy when reading the bios of the women in this show--the four way amputee who climbed mountains in Nepal without her prosthetic legs, captained a 110 foot tall ship, and won a bronze medal in Alpine skiing; the woman with the spinal cord injury who made the US Women's Sled Hockey Team, who hand-cycles, downhill skis, and water skis; the first wheelchair-using TV reporter for an ABC Miami affiliate, also with a spinal cord injury, who rides motorcycles and flies planes--to walk away feeling like an ungrateful slug, who has no right, ever, to complain.

The formal presentation at the event included a terrific video of the models, the photographers, and the experiences they had working together. Created by Ian Neil Karr (who, like all of the photographers donated their time) ends with rich close ups of the vibrant faces of the women, all saying the same thing.

Though at times I admit I did feel inspired, and at other times, like an ungrateful slug, that message of self-acceptance, of celebration, of using everything we have to be everything we can be, well, that felt like a takeaway for us all.