Warning: This post contains nudity and may not be suitable for work environments.

Photographer Anastasia Kuba grew up feeling beautiful. She had light eyes, blond hair and big breasts, attributes conventionally defined as such. From a young age, she was showered with attention. But Kuba still struggled intensely with self-esteem. "My self-worth was connected to my looks," the artist explained to The Huffington Post.

Kuba's self-identification as a beautiful woman shaped many of her life choices growing up. "There was nothing else I thought I had to offer. I was young -- I hadn't really established my identity yet, who I was." To support herself in her early 20s, after moving from Russia to the United States, Kuba worked as a topless dancer. It wasn't a defining moment in Kuba's life, but an affirmation of what she already felt -- that her value was affixed to her appearance.

A lot of contemporary feminist discussion focuses around ideas of empowerment and body positivity, propelling the belief that every woman, or more aptly every human being, is beautiful. Although Kuba doesn't disagree with the sentiment, for her, it misses the mark. "We usually talk about the body positivity movement by saying 'everyone tells us we’re not beautiful enough, but look at us, we are.' I was in a different boat. I was told I was beautiful, but that was kind of it."

Around the age of 25, something in Kuba changed. She shaved her head, stopped wearing makeup, tossed off her high heels -- in her own way, she stopped adhering to the norms of beauty that govern mainstream society. Kuba's photography shifted, as well. Previously Kuba had been focused on boudoir photography, capturing the sexual appeal of bodies. With her new work, Kuba wanted to focus on what it means to exist in a body. No over-arching theme or message. Just truth.

"Bodies tell stories and we are complicated creatures," Kuba said. "I wanted bodies to tell their complicated stories."

Kuba invited willing participants to pose for her work. She received responses from cis women, trans women, cis men, trans men, genderqueer individuals; all of various ages, sizes and backgrounds. Each of Kuba's sessions takes approximately three hours, in Kuba's mind, enough time for their guard to slip, their nerves to settle and their affectations to wear off. The first hour, Kuba only speaks with her subjects, no cameras. "I’m nervous, they’re nervous," she said.

Kuba recalled being shocked when a conventionally beautiful subject would open up about his or her body issues. "The first thing I would want to do is put a band-aid on it and say 'you're beautiful!' I had to learn to keep my mouth shut and just listen." Instead of trying to comfort her subjects, Kuba eventually learned to validate them in their discomfort. Yes, this is awkward, and that's the point.

Through her conversations, Kuba learned that although body positivity is important, it's not the only answer. Beauty is often more complex than physical attributes or empowered self-love. "What the body looks like has nothing to do with what the person feels like in the body," Kuba explained. "Our self-loathing is usually a consequence of trauma, not having control over the body at some point. You can look however you look and feel however you feel and those things are not linked. Someone can look at you and say ‘you’re so beautiful’ but it doesn’t matter. It’s about how safe you feel inside yourself."

After the initial conversation, Kuba's subject undresses, fully and completely. No makeup, no jewelry, no props. All images are captured in natural light. Basically, there is nowhere to hide. Consent is a crucial aspect of Kuba's mission, and she allows her subjects to end the process at any time. She also looks through the photos along with them, deleting any image the subjects aren't comfortable with. To completely relinquish any sense of authority, Kuba allows her subjects to photograph her naked in return, if they so choose.

"I want to capture [them] as they are in the moment, not presenting themselves in a certain way," Kuba added. "When a person starts performing, I call them out on it. I don’t want to focus on empowerment, I just want to photograph what’s in front of me. As raw as possible."

Kuba eventually noticed an unusual outcome of her images -- many of her subjects, in their unclothed state, resembled children. It's not quite what you'd expect from a nude photo, nor something Kuba was expecting, but there it was. "They look so innocent," she explained. "That’s when I realized the project was about the innocence of the body. After you take off all the makeup and all the clothes -- your presentation to the world -- you take all the social cues off and there’s just you."

Each of Kuba's subjects creates a personal essay which is published alongside their images on her website -- snippets of which are included as captions here -- putting into words some of the stories that shaped their bodies into what they are today.

"By the end of doing the shoot, I developed a much more kind relationship with my body and it’s presence," one subject, Neil, wrote following the shoot. "I felt more able to look in the mirror and not just see something merely sexual, inherently female, and private. Which were things that I’ve been associating with my body since puberty." More recently, her sitters also began reading poems, sans clothing. It started by chance, but Kuba hopes the ritual becomes a consistent element in her photography process.

PHOTO GALLERY
Reassuring Mantras For Self Love
Download
Calling all HuffPost superfans!
Sign up for membership to become a founding member and help shape HuffPost's next chapter
Join HuffPost 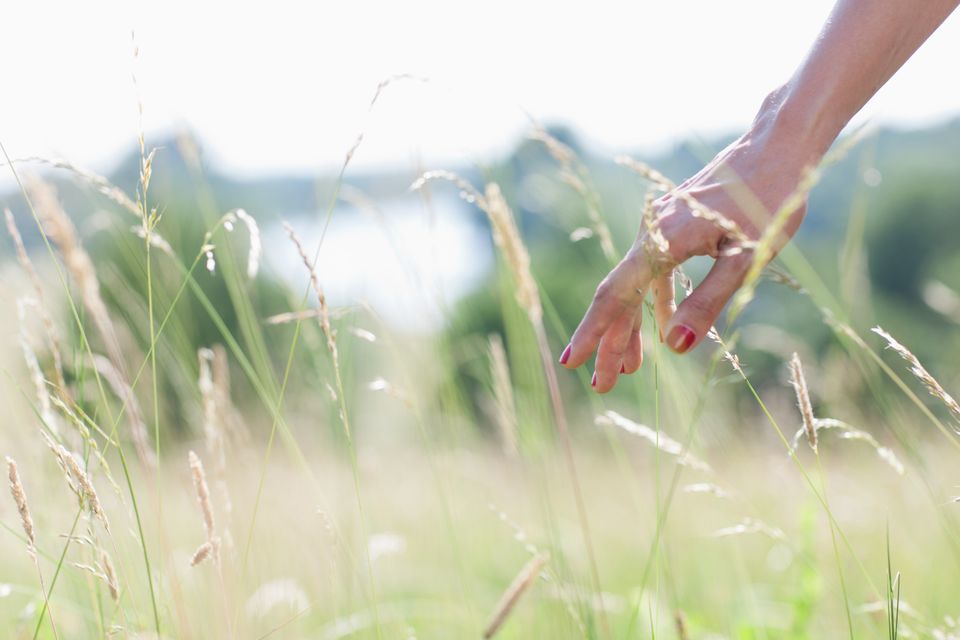 1 / 6
You can make a difference for yourself and others.
Tom Merton via Getty Images