The shot is in the air. This is the moment, the final seconds of an NBA Finals game, Ray Allen loves most. He remembers everything from those final seconds, of course. Every step. Every face. Every involved thought from one of the NBA's most dramatic shots.

Even now, four months later and with a new season starting Tuesday, Allen can reconstruct the end of Game 6 of the NBA Finals, brick by brick, from being so angry in a time-out huddle he channeled Aristotle to his profanity-laced release after the shot.

But the intriguing part to Allen isn't catching the pass while shuffling backward over the 3-point line, which NBA referees broke down in a summer symposium, frame by frame, to see whether Allen traveled (he didn't).

Nor is he surprised by the shot's quick release (.85 seconds) or flat arc (40 degrees), as an ESPN Sports Science segment calibrated. And the daily procession of fans telling him at gas stations and grocery stores what the shot meant to them is welcome fallout considering one bad play sends so many players into hiding.

But the shot in the air is the part that still intrigues Allen. Anything can happen in that 1.6 seconds. Everything's in play. And that fickle flight of the basketball, Allen feels, represents the magic of sports.

"It'd be interesting to freeze it in the air and list all the consequences that are possible for everyone," Allen says. "If it goes in and the Heat win, you can make a list of what that means."

They repeat as champs. LeBron James is the greatest. Dwyane Wade's Twitter handle changes to, "Three" for his three titles. San Antonio coach Gregg Popovich has nightmares -- literal and physical nightmares -- of this shot every day ...

The Heat face disbanding. James is a choker after losing three of four career Finals. Wade is old, hurt, undependable. San Antonio has a fifth title and final victory lap for a great generation of players.

"That is what (the shot) is about to me," Allen says. "We all are sitting on that fence in sports, and we can be pushed in either direction by one shot, or one play or one moment.

"When you're a great team, you're just that far from being a bad team (he holds thumb and index finger a sliver apart). And when you're a bad team, you're that close to being good, too. Sometimes, it's just the shot going in or not."

This is how he frames the shot, too. As the shot. Lower-case. Nothing to suggest the shot, outside of The Moment, which he does talk about in capital letters, was any different from one he practiced daily, polished over decades, made and missed and analyzed and simply took, what, tens of thousands of times?

He stops, thinking. Allen is a notorious thinker. When first asked after Game 6 if the shot was the biggest of his career, he refused to confirm it was. It tied the game, saved the season, let the Heat win in overtime. But he's made 2,857 three-point shots, an NBA record.

He needed a moment to think on it, just as he does here.

"I'd say I've taken that shot several hundreds of thousands of times," he finally says.

He doesn't just mean a stationary shot in the corner. He means that exact shot, backing up across the floor, blindly feeling the 3-point line, jumping a bit off-balance and releasing the ball in .85 seconds at a 40-degree angle.

That is what Allen doesn't think people understand. He prepared an entire career for that moment, working endless hours in gyms, examining how to improve, maybe helped by a borderline obsessive-compulsive disorder. Yes, helped.

Maybe that explains Allen's exacting routines. Consider: He naps each game day from 11:30 a.m. to 1 p.m, has a meal of chicken and white rice at 2:30, arrives to park in the same spot at 3:45, then walks on the court at 4:30, typically the first player, to begin a personalized shooting routine.

Consider: If he misses a shot in the first half of a game, he'll come out for the second-half warm-ups and have to make that very shot. "Just to make it go away," he says.

Here's a story: The first time Heat coach Erik Spoelstra saw Allen in a practice gym was just after Labor Day last year. It was an informal workout, the players just returning from the summer.

Allen was newly signed from Boston, and at the end of a pick-up game, he began a shooting workout. He was passed the ball. He shot dozens of times from the corner, from the wing, from the top of the key.

Allen then did something that's a regular part of this routine: He lay down in the middle of the free-throw lane, hopped up and began back-pedaling to the 3-point line while taking the pass.

He caught the ball and shot it in a seamless motion. And again. A dozen like that. Then he went to one knee, hopped up and repeated the pattern. Then he did it from the other knee.

"Ray, in 18 years, I've never seen anyone do this," Spoelstra said to him.

"You've got to prepare yourself for after an offensive rebound, getting to the 3-point line, getting yourself ready to shoot in the final seconds of a game," Allen said.

That's exactly what happened at the end of Game 6, of course. But that's getting ahead of the moment. Because to understand Allen's mindset, you have to rewind the clock to 28.2 seconds left in a Heat time-out huddle.

San Antonio led by five points then. Heat fans were leaving the building. NBA security began wrapping a yellow rope around the arena to prepare for the Spurs' victory celebration.

"I was angry," Allen said. He wasn't alone. LeBron and Wade were squabbling. Chris Bosh remembers looking across the floor and seeing his wife clapping, and only that image brought him back to the fact they had a chance.

Aristotle brought Allen back. He has studied the Greek philosopher, and leaned on this quote at various times: "Anyone can become angry -- that is easy, but to be angry with the right person at the right time, and for the right purpose and the right way -- that is not within everyone's power and that is not easy."

He focused back on the game. Then came a chain of unlikely events for the Heat: LeBron making a shot off a rebound, Kawhi Leonard missing one free throw, Tim Duncan being taken out of the game, Bosh getting a rebound and scooping to Allen for the shot.

"What amazes me is I have five Spurs near me," Allen says. "I probably should have passed. Someone else could have taken the shot."

He spent a career preparing for that shot. The bone spur. The invented workouts. Aristotle. The several hundreds of thousands of practice shots. This, really, is the magic of sports, when the perfect moment marries the perfect player.

The shot is in the air forever. 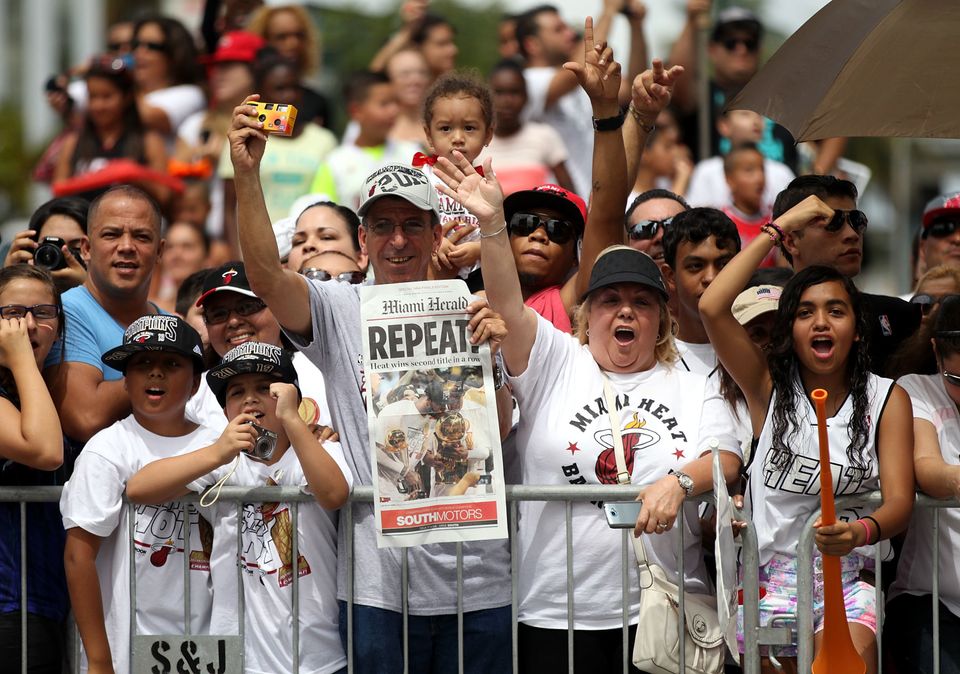