Eyewear style icon Ray-Ban is being praised throughout the lesbian, gay, bisexual and transgender (LGBT) blogosphere for a new advertisement that's both gay-inclusive and trendy to boot.

Released as part of their "Never Hide" campaign in connection with the company's 75th anniversary, the new ad features two sharply-dressed gay men out for a romantic stroll on a busy sidewalk.

View the full ad below, then scroll down to keep reading: 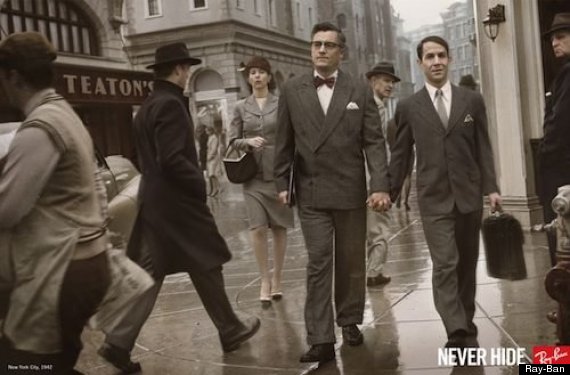 Paris-based agency Marcel reportedly produced the ads as a salute to "people from various eras who have flouted conventions in plain sight." Other shots depict women running through a rainy street in their lingerie, and a jitterbugging couple going in for a racy dip in the middle of a crowded dance floor.

"In its every form, the Ray-Ban campaign portrays regular guys and girls living their day to day lives with authenticity, with the courage to express themselves and their unique individuality, which is the most precious thing we have, because the most fashionable thing to be is yourself," a 2007 press release for the "Never Hide" campaign reads.

Take a look at LGBT-themed advertisements, many of which were originally banned, below: