Ray Bradbury dead at 91. My first thought was: How is this possible? Ray Bradbury dead? Why, at a carnival the astounding Mr. Electro tapped the 12-year-old Bradbury with his electric sword and as the young Bradbury's hair stood on end, Mr. Electro intoned, "Live forever!" And Bradbury took Mr. Electro's proclamation to heart, writing every day for more than seventy years, creating a literary legacy that will indeed live forever.

Bradbury's career included short stories, novellas, novels, radio, film, television and theater. If there ever was a renaissance writer, it was Bradbury.

I met him once at a science fiction convention in San Francisco. It was early, the con having just opened, and I wandered into the author's room and there he was, alone, writing something on a yellow legal tablet. I went over, introduced myself and spent a wonderful 20 minutes discussing the work of his great lifelong friend Ray Harryhausen; "The Beast from 20,000 Fathoms" partially based on his story "The Fog Horn" with the beast animated by Harryhausen; and what it meant to be a writer, the hard work involved, and the resultant satisfaction of a tale well told. The crowds soon gathered around him and I left knowing I'd spoken with one of the greatest writers of the century who was also a nice guy.

His passing marks the loss of a towering talent but his work is his legacy.

Choosing a Top Ten list from Bradbury's seemingly limitless works is impossible, so this will be a list of my favorites and suggested must-reads.

Your mileage may differ but these have remained in my mind since the day I first read them, some as a kid on the front porch of my home, others read as an adult, some in the dimness of an armored personnel carrier's instrument panel while in the Army but each and every one did what every writer wants his work to do: they transported me to Bradbury's worlds of wonder, took me away from reality for a short time.

In no particular order, a Ray Bradbury Top Ten must-read list must include:

The Illustrated Man: The title story of a collection of classic tales, the living tattoos on an itinerant traveler reveal stories that affect whoever "reads" them. The collection includes "The Veldt" where a future kid's playroom comes alive and devours the children's parents; and "Kaleidoscope" wherein an accident rips open a spaceship and spews its space suited crew into space where they meet a variety of fates. This story is so good that I read it a couple of times a year to experience a master at work.

The Martian Chronicles: Each chapter is more an exercise in style and mood than holding to science fiction tropes. But it does take place on Mars but it is the Mars of Edgar Rice Burrows and Barsoom rather than the planet we know from assorted landers and photographic surveys from orbit. Martians are real in Bradbury's world, and as Earthlings arrive, all hell breaks loose but in a calm, retrospective, and brilliantly described way.

The Martian Chronicles is worth reading for the prose alone; from "The Off Season": "The wind hurled the sand ship keening over the dead sea bottom, over long-buried crystals, past upended pillars, past deserted docks of marble and brass, past dead white chess cities, past purple foothills, into distance..."

Small Assassin: How can you go wrong with a story of a newborn child running wild and killing its parents? No, it's not Larry Cohen's classic film It's Alive, although it owes a lot to Bradbury's horror yarn. "Small Assassin'" may have been the first baby-goes-amuck story in horror history and it demonstrates Bradbury's ability to terrify while using his singular style to great effect.

Fahrenheit 451: Based on his short story "The Fireman" this short novel may be remembered more for the Francois Truffaut film with Oscar Werner and Julie Christie. And if so, folks are missing a classic, actual science fiction novel and an Orwellian concept that is chilling. Read the book, see the film. Fahrenheit 451 lives as a warning.

The Pedestrian: This seemingly bland tale -- a man likes to walk, to get out and stroll around in a society that is internal, people locked into their homes, mired in television, never going outside -- takes being a mere pedestrian to a pinnacle of terror because, you see, walking like that makes you different and different is bad and the pedestrian is hauled off by authorities, probably to be reprogrammed to fit in, to be "normal."

A Sound of Thunder: One of Bradbury's most famous stories and this one is science fiction using time travel and the consequences of how making a tiny mistake can unravel an entire time line. During a time-safari to the Cretaceous to hunt a Tyrannosaurus Rex, a hunter accidentally kills a butterfly, which alters the time stream disastrously. Ignore the bad movie based on the story and check out the original. As with so many Bradbury stories it's both disturbing and literary.

The Golden Apples of the Sun: A mesmerizing description of a spaceship's flight into the Sun's atmosphere to capture part of its substance. Scientifically implausible but in Bradbury's hands a masterpiece of heat, terror, and beauty. It's also the title story of a marvelous anthology of 22 stories, among them the classics "The Fog Horn", "The Pedestrian" and "A Sound of Thunder," all noted here. 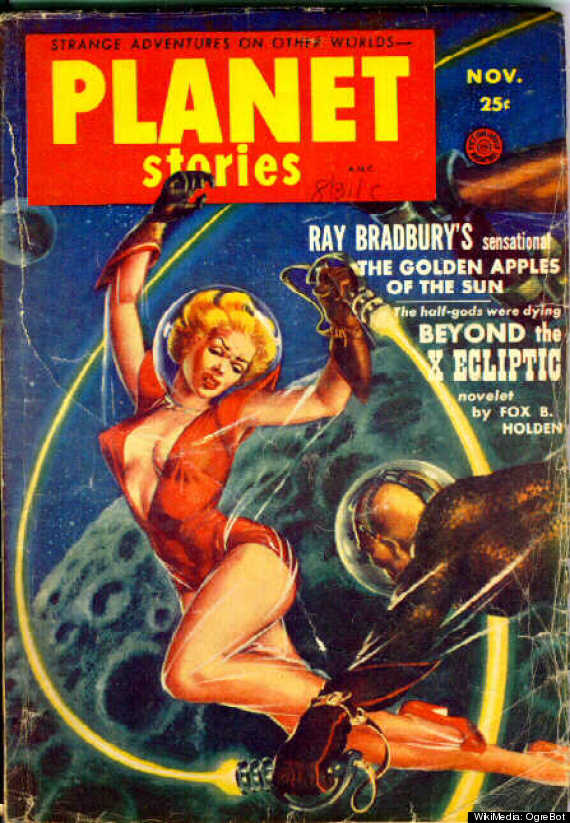 Zero Hour: This one could be called a "study in horror" wherein a young child has made friends with an alien playmate and innocently wants her parents to meet her rather horrific friend so she heads upstairs to introduce the alien to her parents who are hiding in the attic. Another clever Bradbury concept, stylishly written, and one that pegs the Suspense-O-Meter needle all the way into the red.

Green Shadows, White Whale: This odd mix of autobiography, Irish legends, and crazed adventures in Ireland tells the tale of Bradbury working on the screenplay for John Huston's version of Moby Dick. To say that Bradbury and Huston didn't hit it off is an understatement; Huston relished harassing and torturing Bradbury all of which became grist for Bradbury's creative mill.

This is a weird, wacky, and wonderful roman y clef about the creative process, insane filmmakers, and how to live, work, drink, and party in Ireland. I found "Green Shadows, White Whale" this to be a hoot, entirely surprising, and immensely enjoyable.

Dandelion Wine and Something Wicked This Way Comes: These are emblematic of Bradbury's "Midwest surrealism", told from a youngster's point of view, taking place in a picturesque Midwest of the 1920s and 1930s with a picaresque take on the people living there and those who arrive in mysterious and often menacing ways. Bradbury always brings a nostalgic element to his stories, often assuming a melancholy remembrance of better times and interesting people now long gone. If you're looking for journey back to childhood to relive those one-of-a-kind summers, to find out if Mr. Dark really existed, or to explore again the mysteries of life, love, and family, these two novels are must-reads.