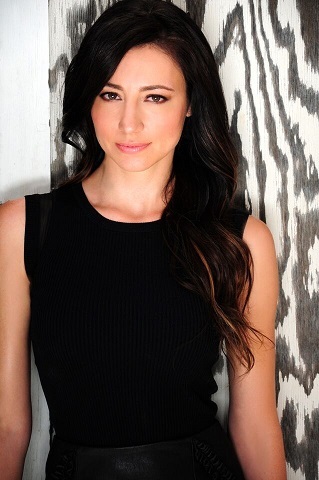 Ray Donovan Actress Christy Williams Thinks Star Wars Is a Piece of...Awesomeness! (Ha! I slayed myself with the headline.)

You know how I can't stop talking about Kenneth Johnson's 1983 mini-series "V"? Well, that's how Christy Williams is with Star Wars - and I just LOVE it!

Christy is also a good sport. I totally messed up and gave her a question not meant for her and she was like, "Hey, ILANA - no worries. You're so freakin' cool, let's forget about it so I can tell you my story!" Well, she didn't say that exactly...not even close.

Ahem. Shall we move on to the good stuff now?

On Ray Donovan, you play the tough call girl, Michelle, who gets lured into doing business with Jon Voight's character, Mickey. What type of research, if any, did you do for your role regarding playing a call girl?

Researching my character is one of my favorite parts about acting. I spend as much time as I can reading memoirs and stories about real women who have worked in whatever profession it is that my character works in, and Michelle was no exception. Reading about real women who made the choice to trade sex for money really helped me grasp what might motivate someone to choose that lifestyle. As an actor you cannot have any judgement on a character and their choices, my job is to figure the girl out, to know why she is doing what she is doing and to know what in her life brought her to this point. I wanted to make Michelle a real woman with an independent spirit. She does not apologize for who she is.

What is it like working with the legendary Jon Voight?

I was beyond excited to work with Jon. He is such a master, a true artist. Any nerves I might have had were quickly dissipated the moment I met him though because he immediately put me to ease with his kindness and generosity. What is great about Jon, is he is smart enough to know that if he includes every actor in the creative process of figuring out the scene, no matter the size of their part, the scene is better for it. He was always encouraging my input and would even tell me to improvise a line here or there. It became a really fun collaborative process. I remember one day he was telling me a story about the time he met Marlon Brando when he was a young actor. He got this sparkle in his eyes as he talked about the conversation he had with Marlon. I looked at him and I said, "Jon, the way you feel about talking to Marlon Brando, is the way I feel about sitting here with you, talking to Jon Voight." He laughed and said "Isn't that something."

When you were a kid, what type of books did you read?

I have always been a total nerd. Every night you would have found me, way after my bedtime, with my little flashlight and a book under the covers. I was obsessed with the Star Wars novels. I read every Star Wars Book I could get my hands on. I read all the Hardy Boys books a couple times. Other favorites that come to mind are: The Adventures of Huckleberry Finn, Treasure Island and Black Beauty.

What do you think is your best quality? What do others tell you your best feature or quality is?

Loyalty. Once you have got me on your side, I am loyal to the end. My friends tell me that they know I would drop anything to come help them out if they needed me, and I absolutely would. I also get "You have a dancer's body" and "How did you get that butt?" The answer is "Thanks!" and "My Momma."

If you could sleep for 24 hours straight, where would you want to wake up?

On the set of a Star Wars movie, the director would yell "Action" and I would climb into the Millennium Falcon with Chewbacca.

Do people feel comfortable coming up to talk to you or do they shy away?

As a young teenager I was very serious and if I am honest, probably not as approachable as I became later in my teens and in my adulthood. People are definitely not shy about approaching me now and I hope that they wouldn't be. I love meeting new people. Recently I have had more fan interactions since my role on Ray Donovan started. It has been really lovely to get to talk with people that love the show so much. Ray Donovan fans are awesome.

You're a big supporter of Mission Blue and other organizations that work to take care and heal our planet. How did you get involved in these organizations and what exactly do you do?

I connect with Mission Blue so much because I am a lover of the sea. I love to be in the ocean and explore ocean life. I have never once gone out in the water, no matter if it was Puerto Rico, Hawaii, or Los Angeles, and not seen pollution and trash. It is so sad to me that we are neglecting such a vital part of our world. My personal mission is to raise awareness and financial support for Mission Blue and other similar organizations because the work they are doing is drastically changing the health of our oceans and that makes me happy and the environment happy.