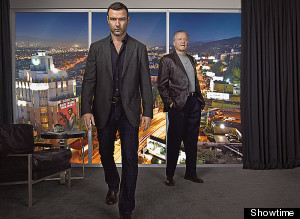 All right, everybody! In honor of the Sunday premiere of Showtime's "Ray Donovan," let's all take an Anti-Hero Pop Quiz! Because pop quizzes are fun!

1. True or false: The star of your show is brooding, often terse and usually catnip to women.

2. Multiple choice: The lead character is

b) capable of serious violence at the drop of a hat.

d) employed in a field that puts him in contact with unsavory, unpleasant or unethical types.

e) from an ethnic or socio-economic subculture.

g) all of the above.

a) is defined by her relationship to her family, and we don't see her outside of that context or dealing with other concerns.

b) continually wants things (time, attention, family focus) that her husband is unwilling or unable to provide (sample dialogue: "You said you weren't going to do that sh*t anymore!").

c) is somehow complicit in his actions via their wealthy lifestyle.

e) is played by an actress who is so good that you wish she could get her own one-hour drama about a complex female character -- if we lived in a universe where that could regularly happen on American TV.

f) all of the above.

4. True or false: The lead character's relationship with his father and/or mother is toxic.

5. How does Brooding Anti-Hero Man communicate?

a) With his fists.

b) Via meaningful glares.

c) He tells less savvy characters How It's Going to Be.

6. True or false: There are boobs aplenty.

a) are sharp and sassy.

b) were innocent but are growing less so by the day.

c) are there to show that Dad's Example Affects the Kids.

d) are spoiled and this is a source of grief to dad, who had a rougher upbringing.

e) are all that the lead character cares about, allegedly (he only occasionally spends time with them).

f) all of the above.

8. True or false: There are multiple scenes in which women (some of them prostitutes, of course) are treated as sex objects, and they have only a few to no lines. Or they are there to "twerk."

9. The lead character's siblings or other family members are there to provide

a) shenanigans that the lead character can rescue them from (or make worse).

c) context for how the lead character bettered himself (but did he, really?).

d) all of the above.

10. True or false: Through his arrogant acts and lone-wolf behavior, the lead character creates a lot of wreckage around him, but he has Problems and is Sad about Some Stuff, so give him a break!

I wish I could say that "Ray Donovan" is just a garden-variety disappointment, but the new Showtime drama is more than just an average letdown. It seems to indicate that Showtime is not looking to the future -- a future the network was helping to create via the addictive dual psychodrama "Homeland -- but to the testosterone-soaked past.

It's one thing for a show to underuse extremely capable cast members such as Liev Schreiber and Paula Malcolmson, who play a Hollywood fixer and his wife. Schreiber brings versatility and charisma to the role of Ray, who acts as a combination security man/troubleshooter/enforcer for a powerful pair of entertainment lawyers, and Malcolmson is typically fierce as Ray's wife, who hates their glitzy neighborhood and the dangers and demands of Ray's 24/7 job. The fact that these actors aren't called upon to display much of their range in this ungainly and derivative show is deflating, but great casts are assembled to no great purpose all the time.

No, the bigger problem is that the show is an awkward melange of anti-hero tropes, which are so familiar by now that they verge on -- or veer into -- melodramatic cliché. "Ray Donovan" is the latest example of Dick-Measuring TV, in which powerful, angry men assess what they've amassed and scrabble for more -- but none of it, of course, can fill the gaping voids within them, etc.

I can understand the appeal of these kinds of shows for TV executives, who are often as competitive and ruthless as the anti-heroes they help create, but "Ray Donovan" is not an inspired riff on what's come before; it's more Frankenstein's monster, assembled from an array of shopworn parts. Given that this is a drama about a tough guy from an ethnic, criminally connected East Coast clan who works with actors, singers, executives and industry lawyers, ultimately the show comes off as a less inspired version of "The Sopranos" with a side of "Entourage" -- with all the veneration of machismo that combination implies.

It's certainly fashionable now to bash the truly terrible later seasons of "Entourage," but the show's combination of satire and aspirational bromance was fairly addictive in its early years. In the early going, the amiable Hollywood semi-satire knew to give the audience at least a little sincerity now and then; before it descended into repetitive self-parody, viewers occasionally had someone or something to root for, and there was an occasional underdog spark to the proceedings.

"Ray Donovan," on the other hand, is purely cynical about the industry, but the way it savages Hollywood isn't particularly inspired and has been done better by a half a dozen better behind-the-scenes TV shows and movies. We don't particularly need another show to tell us that entertainment industry types can be self-absorbed, heedless and loathsome, do we?

From that perspective, it makes sense that Ray Donovan doesn't respect most of the people with whom he works; they are generally spoiled at worst and deluded at best. But several episodes in, I still wasn't entirely sure what Ray wanted or needed, except for vengeance against his old man, who is newly released from prison. Jon Voight plays Mickey Donovan with the right mixture of peevishness and obliviousness, but the show can't quite decide if it wants Mickey to be an intimidating toxic patriarch or a clueless, party-loving old coot. If the idea is for "Ray Donovan" to say something about generational cycles of violence and the inability of men in brutal subcultures to connect, well, get in line. TV creators have been working that field a long time ("The Sopranos," "Breaking Bad," "Mad Men," "The Shield," "Sons of Anarchy" and the rest of the usual suspects), and "Ray Donovan" has nothing new to add to the conversation about male isolation, anger and competition.

There are clear attempts to make Malcolmson's character more than the typical shrewish anti-hero wife, but they are insufficient, and that is an enormous shame, given Malcolmson's indelible presence and volcanic potential. The only "Ray Donovan" characters who make much of an impact are around the margins: Eddie Marsan is quietly effective as Ray's brother, Terry, whose career as a boxer left him with Parkinson's, and Steven Bauer is scene-stealingly fantastic as Ray's chief assistant. But much of the show simply feels disjointed, or tired, or both. Despite intermittent flashes of liveliness, the pacing of "Ray Donovan" is off, especially at first, when it feels as though the show is trying to cover too much ground and cram in too much backstory about the Donovans' troubled past in Boston. Later, the pace evens out, but the stakes surrounding Ray's employers, his father and his kids fail to engage on any significant level.

In the last 15 years, many of us have been lucky enough to get to know a series of mesmerizing anti-heroes who are hobbled by their rage, their pain and the difficulties they have sustaining meaningful personal connections. A great deal of territory in that storytelling realm has been masterfully claimed, but there may still be fresh, compelling ways to come at those issues.

At this stage, "Ray Donovan" hasn't quite found them.

Ryan McGee and I discussed "Ray Donovan" and "Hannibal" in this week's second Talking TV podcast, which is here, on iTunes and below.