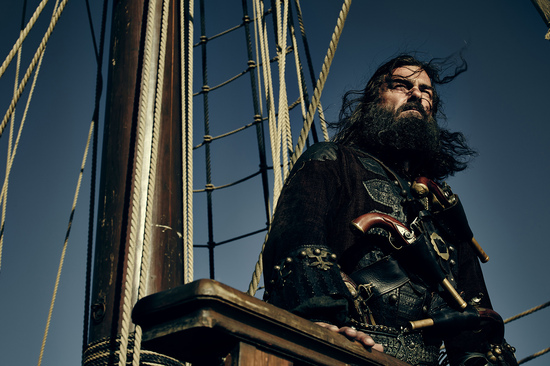 The Blackbeard audiences first encountered in last Saturday's third season premiere of Black Sails was not a near-mythic scoundrel, fuses smoking in his famous facial hair. Instead, it was a man sitting at a desk, writing letters. That is, until a group of men show up to question his marriage vows to their sister, and won't take his word for an answer. They draw their swords, and he slowly rises, introduces himself as Edward Teach, the most famous pirate of all time, and promptly guns them down.

And so enters actor Ray Stevenson into the pirate world of Starz' historical drama.

Merging the fiction of Robert Louis Stevenson's Treasure Island and loosely based on facts from the so-called Golden Age of Piracy (the 1650s to 1730s), the series has been a success for Starz, and justly so. It combines battles on land and at sea, brawling, sex, and political maneuverings.

This season, the show is at last unleashing the biggest, baddest pirate who actually lived: Edward Teach, aka Blackbeard. Within the show continuity, Teach returns to the pirate island of Nassau, which he established, to find it soft and decadent. He pursues his old friend Charles Vane, and has his eye on returning order to the island.

Meanwhile, when he isn't filming, Stevenson - known for his work on Rome, Dexter, the Thor movies, and Punisher: War Zone - joined me on the phone from his home in Ibiza, which he refers to as his own pirate island. In the following conversation, the actor discusses the research he put into Blackbeard, and how he set about bringing the pirate to life on Black Sails without becoming too, well, "pirate-y." As a bonus, he also tells a pirate joke, opens up about his role as comic-book anti-hero The Punisher, and whether he'll return for the third Thor film.

Where are we in Blackbeard's career when we meet him on Black Sails? Has been active a long time?

Stevenson: History is written by victors and, occasionally, sensationalist journalists. I mean that with the best respect. The pamphlets going back to London telling of the violent derring-dos of the Bahamian pirates were the ones that brought infamy to the names of Charles Vane and Blackbeard. How much of that is really documented history? It carries a flavor with it, but take all this with a pinch of salt. Overall, in broad brush strokes, that period - early 1700s to 1790s -- was short but incredibly vibrant, violent time when the pirates were at their peak. This is while France, England, Spain, Portugal, these sovereign nations were at war with each other, funding their wars by raping, pillaging, decimating the cultures of South America, stripping them of their wealth, gold. The pirates were taking it off them. There was an inevitability to Edward Teach. He was a well-read man, an intelligent man. He knew this was not going to last forever. This was a period. As soon as armistice or piece was signed, that would be his day.

What intrigued you in your research about the men who would become pirates, and what of Blackbeard, specifically?

Stevenson: There is something about these men. The conclusions I was drawing was you were what you were born. That was it. You would never elevate yourself to the upper echelons of society. But here, there was a chance for men to carve their own destiny and be the free spirits they were, and be all they could be. It was too bloodthirsty to be romanticized, but compared to the life they would be subjugated to, they had too much more to do. That's the world in which our drama plays out. That's the world in which Black Sails is presented to the public. It is to be as entertaining as it is to be authentic. We're not doing a docudrama. These men didn't see themselves as historical characters. They are contemporaries. I love that challenge of fleshing these people out. Blackbeard was larger than life. He was 6'4" in 1710. He was a colossus, and like a rock star walking into a bar. He was a tremendous commander, a great leader. I don't give a damn if you like Blackbeard. I don't care if you think he is an absolute despot. Do you believe me? If you do, I've done my work.

Because he's been portrayed so many times in popular culture, how did you decide to make your Blackbeard different?

Stevenson: It's a good point: Why, again, do we need another Blackbeard? But why does Hamlet still play? The actor brings that intangible quality of them as an individual to discovering the truth of that role. You have this character who comes in and rents a hole in it by virtue of turning up. But you don't want him to be damaging to the Black Sails series. He is part of the absolute essence of Nassau. He set Nassau up, and co-wrote the pirate's charter, yet he's been away eight, nine years. He already had a legend when he left, but he's come back. He has already upsetting the apple cart just by standing next to it, and hasn't come in guns blazing. He knows the power of his turning up.

Let's discuss those blazing guns. In the first scene we meet Blackbeard, he's writing a letter when confronted by the family of a woman he supposedly abandoned. He's quiet, but there's a menace as we only see his eyes - before he eventually guns them down.

Stevenson: If those guys had just listened to him, and turned around and walked out, he wouldn't have done anything. I have to find a better phrase, but he is not a d--k swinger. I don't stand up and menace people. These guys drew their swords, and he was like, "OK, it's on." There is no doubt in his mind.

Even though he isn't one to posture, he shows up, asserts himself, and appears to be on a mission. What is that mission?

Stevenson: That's a different motivation. He shows up and asks where his friend Charles Vane is, but he doesn't show up beating people. There is a history between them, and he wants to see where that stands. He is basically trying to find his son. He is Henry VIII, and has fathered daughters but no sons. If god has not given him a son, the closest is Charles Vane. He has come back with this idea to go back as a pirate, but not one pirate with a ship, but come back to set up the most terrible pirate fleet in all those waters. He wants, by his side, the one person he thinks could carry his legacy, his legend. He has come back to see if that can be rekindled, but he has come back to a Nassau that's gone decadent.

When your Blackbeard finally goes to battle, will those famous fuses he reportedly burned in his beard make an appearance?

Stevenson: [Laughs] Well, I cannot say. They may well. I cannot say because - hats off to this production - they have been very conscious about avoiding this whole pirate-y thing, and realizing how much that could distract and slip over into caricature. I don't think you see a pirate with a parrot on his shoulder, for example. And even with the accents. I was keen on exploring Blackbeard's natural Bristol [very distinct] accent. That's West Country England; they were great seafaring folk. Unfortunately, ever since the birth of pirate films, there has been this hammy accent. Like, "Why are pirates funny? They just Arrrr!" So going in, doing the best Bristolian accent, it just didn't ... we had to tamper that right back. There have been certain things we've had to be careful that wouldn't distract or detract from the telling of the story. [Pirates] are a victim of their own success. People have identified with pirates in a comic and caricature sense. If there are danger areas, you make a decision to not go there. Preserve the play, and protect the story.

Will you be heading back to Asgard in Thor: Ragnarok as Volstagg

Stevenson: You know, I don't know what happening. I'm waiting to hear. I would love to get the Warriors Three back in the saddles for the Vikings in space. But you have to talk to Marvel about that, and see if it's going to materialize.

Let's briefly talk about 2008's Punisher: War Zone. Even though it didn't perform at the box office, it has its fans. Looking back, what do you think of that role, and the film's legacy? And do you have any thoughts about Jon Bernthal stepping into the role?

Oh, I loved playing that role. The fans who have come up to me! I have such respect for Garth Ennis' writing, and Tim Bradstreet's illustrations, and the darkness of that character. Looking back now, I know we based the story on comic books, which essentially were already 10 or 15 years old. There is so much potential with that character. But it is a huge choice because you've an R-rated character; you can't diminish him. I remember sitting in one of the first meetings with Lionsgate after having really lost myself in the comics trying to understand this character. I said, personally speaking, I don't want anybody who watches this movie walking out wanting to be Frank Castle. There was a tumbleweed moment because, obviously, this could be a kiss of death.

I didn't want people to go out wanting to go tool up against the bad guys (and at impressionable ages). I said, don't shy away from the violence or pull back on this, commit to this. But I wanted people who watched this to feel that he's in such a dark place you don't ever want to be him, but you're very glad he's there, and can't wait to see what he does next. It is a much deeper level and exploration of this character. I think it has got legs for the future.

And hand on heart, I wish [Bernthal] the very best. The last movie didn't do the box office the way they hoped, and I am delighted Frank Castle has not been pushed aside. He is a valid part of that universe. When he first arrived, he was brought in to assassinate Spider-Man! He is a tremendous tactician, and among all the Marvel super heroes, he doesn't have a super power. He just has this warrior's mind that people like Thor, or whomever with a sort of moral fiber, would disagree with. But he is still a very relevant part of that universe. I wish him the very best, and thrilled Frank is still out there somewhere.