(RNS) Cardinal Raymond Burke, a senior American churchman in Rome who has been one of the most outspoken critics of Pope Francis’ push for reform, is roiling the waters yet again, this time arguing that the Catholic Church has become too “feminized.”

Burke, who was recently demoted from the Vatican’s highest court to a ceremonial philanthropic post, also pointed to the introduction of altar girls for why fewer men are joining the priesthood.

“Young boys don’t want to do things with girls. It’s just natural,” Burke said in an interview published on Monday (Jan. 5). “I think that this has contributed to a loss of priestly vocations.

“It requires a certain manly discipline to serve as an altar boy in service at the side of (a) priest, and most priests have their first deep experiences of the liturgy as altar boys,” the former archbishop of St. Louis told Matthew James Christoff, who heads a Catholic men’s ministry called the New Emangelization Project.

“If we are not training young men as altar boys, giving them an experience of serving God in the liturgy, we should not be surprised that vocations have fallen dramatically,” Burke said.

The Catholic Church dropped its ban on girls assisting the priests during Mass in 1983, and today it is common to see more girls than boys helping on the altar. Only one U.S. diocese, in Lincoln, Neb., still bars altar girls, though a number of individual parishes have barred them in hopes of encouraging more boys and men to consider the all-male priesthood.

In the interview, Burke also blamed gay clergy for the church’s sexual abuse crisis, saying priests “who were feminized and confused about their own sexual identity” were the ones who molested children.

Researchers have disputed that claim, and experts note that the reported rise in the number of gay men entering the priesthood since the 1980s coincided with a sharp drop-off in abuse cases.

Burke, 66, spoke to Christoff in December during a visit to La Crosse, Wis., where Burke served as bishop in the 1990s before being named archbishop of St. Louis. In 2008, then-Pope Benedict XVI called Burke to the Vatican to head the church’s top court and made him a cardinal. That prestigious position lent weight to his increasingly sharp and direct criticisms of Francis, who succeeded Benedict in March 2013.

In an unusual move, Francis effectively demoted Burke in November, shifting him from his job in the Roman Curia to a largely ceremonial post as patron of the Order of Malta, a global Catholic charitable organization based in Rome.

Vatican observers suspected the switch would actually give Burke more freedom to speak his mind, and in this latest interview the cardinal doubled down on themes he has often struck: that liberalizing changes in both society and the church, especially “radical feminism,” have gravely undermined the Catholic faith since the 1970s.

Burke said he recalled “young men telling me that they were, in a certain way, frightened by marriage because of the radicalizing and self-focused attitudes of women that were emerging at that time. These young men were concerned that entering a marriage would simply not work because of a constant and insistent demanding of rights for women.”

He said that “the radical feminist movement strongly influenced the Church” as well.

The focus on women’s issues, he said, plus “a complete collapse” of teaching the faith and “rampant liturgical experimentation,” led the church to become “very feminized.” That turned off men who “respond to rigor and precision and excellence,” Burke said.

“Apart from the priest, the sanctuary has become full of women,” he said. “The activities in the parish and even the liturgy have been influenced by women and have become so feminine in many places that men do not want to get involved.”

Burke, a liturgical traditionalist as well as a doctrinal conservative who is renowned for wearing elaborate silk and lace vestments while celebrating Mass, also said that “men need to dress and act like men in a way that is respectful to themselves, to women and to children.” 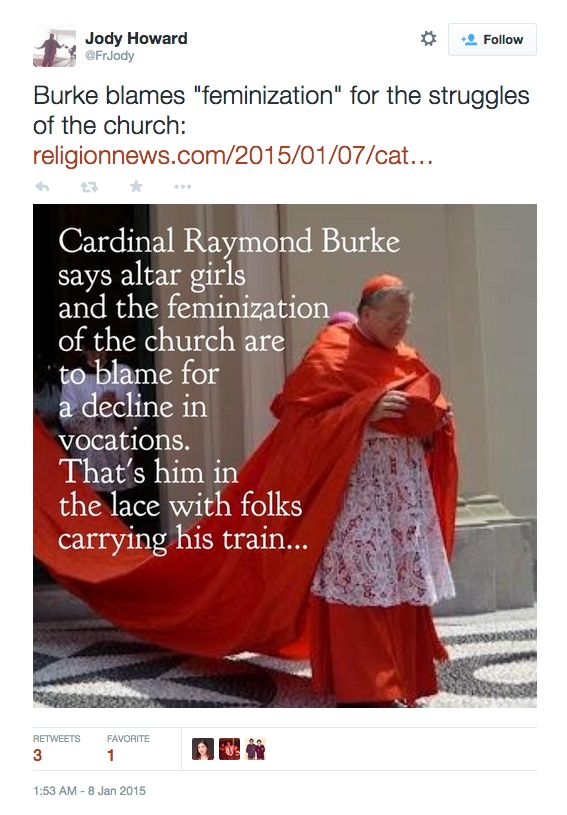