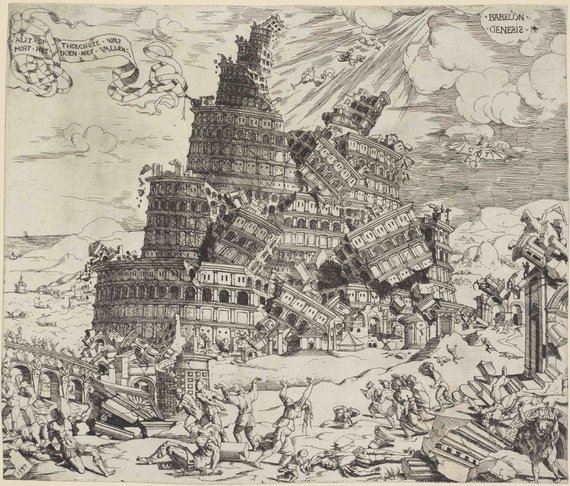 In these Xenophobic times, we should recognize that Razing Babel was a blessing not a curse. The punishment of imprisonment within a single, narrow tongue proves much, much worse than the inconvenience of dealing with others who don't speak our native language. Here's why:

And then, of course, there is the aesthetics of it all. I love English but I couldn't imagine a world without the beauty of French or of the different chords of other languages I've encountered (and no doubt, too, of those I've yet to hear).

Since language is our tool and not the reverse, such blessings in diversity of words a fortiori apply to diversity in us. (Allow me the Latin here for its beauty and precision as well.) That beauty in our own diversity is also part of the lesson of Razing Babel.

Since the need and beauty of all such diversity is sadly lost on many today, I'll take diversity even further here and speak in sonnets of diverse, competing form (4/4/3/3 vs. 4/4/4/2). Verse in lieu of prose (and prose in lieu of verse) and fun with puns in both further underscore the glory of Babel's fall.

Before the tower, we were garroted
By one chord twisted fast around our necks
That kept us on its single cord until
God's razor cut the not. We raise new sounds,

Explore new knowledge, claim new liberties
We hear in novel syllables that, too,
Improve our poetry through vaster stocks
Of words and rhymes than ever heard before.

Translation tunes new sounds and teaches, too,
Not merely of things said but of ourselves
Now singable in sounds unknown before

As languages compete in novel sports
Of wrestling one another for the pen
That none should hoard lest Babel rise again.

In simpler times a single tongue served as
A single handle on a broader world,
A single inventory of the means
To praise a multifaceted Divine.

In simpler times a single king sat throned,
A single hunter wearing Adam's skins
That claimed one sovereignty unchallenged of
Both man and beast without conflict of laws.

In simpler times a single way rose up
Unto the Heavens, a single tower men
Devised with one geometry and built
With proper symmetry of form until

God's thunderbolts, O Nimrods now and then,
Roared God will have diversity in men.

You can also read this post and other posts on my Law and Language blog here and here.