For a couple of glorious days in the beginning of January rain bucketed down in Southern California -- rain boots were dusted off as El Nino 2015/16 arrived. Or had it?

Turns out, it was just a sneak preview. Because although this El Nino has caused flooding in the U.S south and parts of South America, along with worsening drought conditions in Southeast Asia, eastern Africa and Central America, it has yet to bring its moisture-laden tropical storms to our drought parched state.

Weather experts believe El Nino will come and may strike soon. But what they also tell us is El Ninos - caused by warm ocean temperatures off the coast of Peru changing atmospheric pressure - typically come towards the end of the winter, sometimes as late as April and May.

Meanwhile Northern California is experiencing the usual winter pattern of cold storms from the northern Pacific Ocean. These weather systems are not El Nino driven, but are bringing plenty of rain - making up for their lack luster efforts during the state's four-year drought. Average rainfall in Fresno is at 153% since October, and San Francisco is getting deluged. 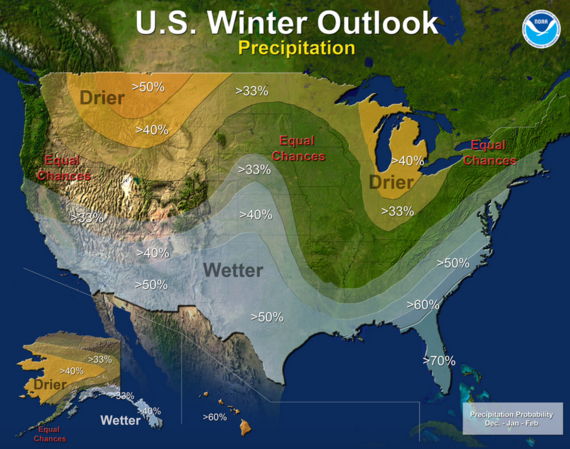 These storms are a stroke of luck for a state with the majority of its water storage infrastructure in Northern California - about 43 million acre-feet worth.

Recent rainfall is beginning to refill heavily depleted reservoirs. Though general wisdom is that even combined with El Nino 2015/16 - predicted to top the big one of 1997 - there won't be enough rainfall to dig California out of its water deficit pit. The State Water Projects largest reservoir, Lake Oroville, is at 36% capacity.

In part because this El Nino will dump mostly in Southern California, and herein lies the rub.

The heavy downpours earlier this month saw almost an inch and a half of rain fall at LAX - a new daily record - but most storm water isn't collected in Southern California.

"An average 1-inch of rain from a storm can create about 1 billion gallons of runoff in LA county storm drains. That's about 120 Rose Bowls worth of dirty water that goes straight into the ocean," says Dana Murray, Senior Coastal Policy Manager for Heal the Bay.

What seemed like great planning then isn't doing us any favors now.

Especially when the effects of climate change are added into the hydrology equation. The drought is said to be a precursor of conditions to come - U.N IPCC climate models show drier places getting even drier while wetter parts of the world get wetter.

Which means California is scrambling to realign its approach to water management on every level.

Back in April California Governor, Gerry Brown, imposed a mandatory 25% reduction in water use for most of the state. Los Angelenos have daily water use down to 106 gallons per person/day - impressive when the average north American can use up to 270 gallons/day.

The city of Santa Monica, in LA County, is ambitiously aiming for water self sufficiency by 2020. Noteworthy - because it relies partly on catching 182.5 million gallons of rainwater every year before it runs into the oceans.

Water self sufficiency is a hot button issue in Southern California - which imports 75% of its water via the most elaborate and expensive conveyance system on the planet.

But this water system is becoming less sustainable with every passing day. One of the most glaring factors is demographic. In the 1950's when water allocation from the Colorado River and infrastructure was being put in place there were 4 million people in SoCal - now there are over 22 million.

The something that's gotta give is our relationship to water.

Santa Monica's catchment tanks won't be in place for this El Nino, but there are other water-saving projects going on in the county. LA Public Works has saved 400 million gallons of water from the beginning of El Nino with spreading grounds - conservation facilities located in areas where underlying permeable soils let rainwater percolate into underground aquifers.

We are on track to become a state of water harvesters and recyclers - it's just a question of how quickly we can have capture and storage infrastructure ready and in the right places.

Catching storm water before it drains into the ocean is a no-brainer. Especially when an El Nino can bring TWICE California's annual rainfall in a matter of months - a huge boon for a thirsty future.