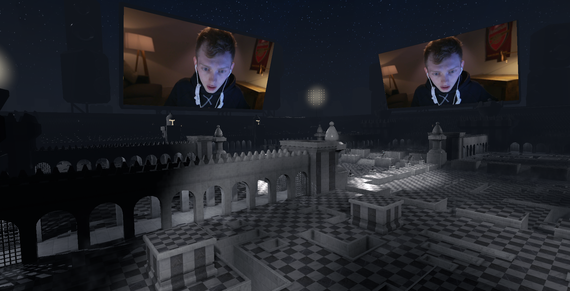 Image from Ctrl - the game begins

Ctrl by Breaking Fourth was my first experience with virtual reality. I went to an interview and within five minutes the Samsung Gear VR was being strapped to my head. I couldn't have been less prepared for what I was about to experience. I turned my head and focused on the play button.

Describing your first virtual reality experience is a lot like telling someone about a lucid dream. The experience isn't as magical or gripping if the other person wasn't there to experience it. The drama began with dark surroundings. White lights were falling from above. I was moving forward at an unnerving speed. I floated around an arena that reminded me of the Hunger Games. I anxiously swung my head around in search of signs that I was still in the meeting room- there weren't any.

As the story began to unfold around me; it was dark, gritty and oddly compelling. The experience was superior to any 3D movie I had paid an excess for at the cinema. Using immersive theatre techniques, Breaking Fourth blur the lines between imagination and reality. All of your senses itch to engage with the mesmerising setting. You can't resist being pulled deeper into the emotional complexity of the story. No other medium has been able to execute this sensation successfully.

Virtual reality feels simultaneously intimate and comforting. It pushes you outside of the Directors highly contrived viewpoint. Being wholly immersed means you can connect with the raw emotions on display. Unsurprisingly, the gaming industry fully embraced virtual reality's immersive capabilities. Gamers emotionally invest in the narratives of their favourite games. Virtual reality complements this demographic's desire to be inserted into the story. All the while benefitting from a more enhanced and realistic gameplay.

Storytelling in Virtual Reality is a director's dream, the level of engagement is incredibly high. At present film directors face the difficult challenge of making their content so engaging that nobody checks their phone. Modern short-form content apps like Snapchat and Vine are not making it any easier. They are rapidly becoming the default method for sharing news and stories.

Virtual reality content is starting to infiltrate the mainstream media. According to Oculus, one million people tried the Samsung Gear VR in April. The Guardian recently released 6X9, a disturbing portrayal of solitary confinement conditions. There are virtual reality documentaries that give us a glimpse of life in a Syrian refugee camp. Unlike traditional 2D content, we're forced to confront and engage with the virtual world. It doesn't matter how uncomfortable it makes us feel.

Breaking Fourth wants to place the audience at the centre of emotionally intense stories. Their unique application of immersive theatre techniques gives the audience complete freedom to interact with their surroundings. It's a groundbreaking method of storytelling that no other content provider has adopted yet. It won't be long until we are on our sofa's fully immersed in Game of Thrones. Or singing 'Hasa Diga Eebowai' to the Mormons. Are you tempted to immerse yourself into a virtual world?