Harvey Milk famously told people, "I know that you cannot live on hope alone, but without it, life is not worth living. And you... And you... And you... Gotta give 'em hope." Although Milk was assassinated on November 27, 1978 (before the onset of the AIDS crisis), I think he would be extremely proud to see how the LGBT community has evolved. He would marvel at the international progress of the marriage equality movement.

On July 16, 1992, Bill Clinton (who was born in Hope, Arkansas) ended his acceptance speech at the Democratic National Convention with the words, "I still believe in a place called Hope." Even though he signed "Don't Ask, Don't Tell" and 1996's loathsome Defense of Marriage Act into law, Clinton has done a 180-degree reversal and now supports same-sex marriage.

Hope, as they say, springs eternal. Earlier this year, during his visit to Israel, President Barack Obama helped to broker a thaw in the tense relations between Israel and Turkey during which Prime Minister Benjamin Netanyahu apologized over the phone to Prime Minister Recep Tayyip Erdogan for Israel's May 31, 2010 commando raid on a Turkish ship near Gaza.

Whether an act of kindness is random or politically calculated, it's still an act of kindness. Although many Americans have grown familiar with the cadence of President Obama's political speeches, his address to the Israeli people was aimed squarely at those who can foster the greatest amount of change: the young. I was glad I spent an hour watching Obama's speech to approximately 1,000 students about how security, peace, and prosperity can guide Israelis down a path to a better life for all who live in the Middle East.

The following morning, this poignant video from the Anti-Defamation League appeared on Americablog.

Four short films screened during San Francisco's 2013 CAAMFest demonstrate how random acts of kindness can have a deep and lasting impact on people's lives. Each is quite remarkable for its dramatic context, universality, and the imagination of its filmmaker.

Written and directed by Varun Chawla, For Hire is a 24-minute film set in Mumbai. Munna (Ganshyam Lalsa) is a taxi driver who is having trouble making ends meet. His boss offers him a chance to pick up some extra money by driving a prostitute to and from her high-end clients.

As he watches Maya (Rajashri Deshpande) in his rearview mirror, he observes how she manages to stay in character for her customers. But after seeing how Maya is treated by an abusive client, Munna realizes that he doesn't have the stomach to witness such behavior again.

What made Chawla's film so interesting to me was his use of the Yiddish song, Papirosen, as a leitmotif for a battered prostitute who must depend on the kindness of strangers. Gay audiences have grown accustomed to hearing Irwin Keller perform this song with The Kinsey Sicks. The following video was created in memory of Polish Jews who perished in the Holocaust.

Written by Owen Andrade, Michael Shu's Unmentionables is a sweet and sobering fantasy set in a laundromat. Sammy (Luca Rodrigues) is a young man with asthma whose sense of injustice (combined with the ability to jump into a large clothes dryer and travel back through time) allows him to intervene on behalf of Joy (Alice Wen), a single woman who is being harassed by the laundromat's obnoxious owner (Edward Rowley).

There are times when opening your heart to the possibility of a new love means letting go of an old one (especially one that keeps haunting you). In Six From Certain, Jonathan Moy and Lawrence Gan do a lovely job of helping their hero, Sean (Rane Jameson), get over his doubts about embarking on a new relationship. With strong supporting performances from Bryony Grace, Amanda Mendoza, and Jason Peter Kennedy, Six From Certain has a rare grace and simplicity. You can watch this short in its entirety in the following clip:

Finally, there is Two For Departure, one of my favorite short films from this year's festival. Written by Kevin Chatupompitak and directed by Hyun-Jae Lee, the film begins as a female tourist (Ferya Miraki) heads for the famous bridge over the Khwae Yai River, determined to jump to her death. As she starts to climb up on the rail, she notices something in her peripheral vision and is shocked to see a Thai man (Nattapol Nillapoom) who is also about to commit suicide by jumping from the bridge. The shock of being caught (coupled with the shame of trying to commit suicide) causes both of them to abandon their plan to jump from the bridge.

Over the next few days, each time the woman tries to commit suicide using a different technique (hanging, using a plastic bag for self-asphyxiation, etc.) she discovers the man trying to do the exact same thing. Finally, they reach out to each other and embrace life, instead. 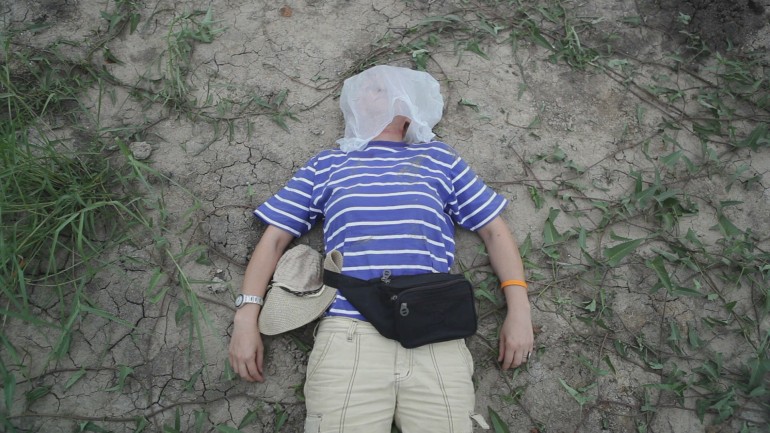 It's not easy to mock suicidal impulses, but Two For Departure rises to the occasion with an odd combination of wit and compassion. That's easier said than done!