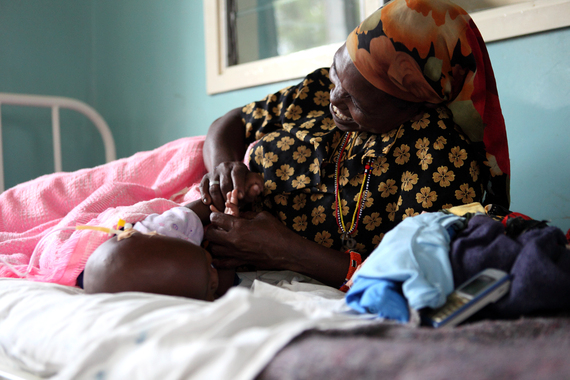 One ordinary day this spring, in one of the countries supported by the Elizabeth Glaser Pediatric AIDS Foundation (EGPAF), a health care worker provided a woman with HIV counseling, HIV testing, or antiretroviral medicines.

Perhaps it occurred in a one-room private clinic along a quiet dirt road in Swaziland. Or it might have happened on the second floor of a government hospital in Harare, Zimbabwe, to the din of car horns and rumbling trucks. It might have occurred in any of the 7,000 facilities around the world that EGPAF supports.

There was nothing particularly special about that moment for the dedicated health care worker, who provides services to prevent mother-to-child transmission of HIV to women every day.

But it was a hugely important encounter for the client that will nearly ensure that a daughter or son that she bears will be HIV-free. And if she lives in an area that has implemented the most effective prevention regimens, that woman, if infected with HIV, was able to enroll in lifelong treatment increasing her opportunity to live a long and healthy life.

Although there was no fanfare, that woman represents an EGPAF milestone. She was the 20 millionth woman that EGPAF reached with prevention of mother-to-child transmission (PMTCT) of HIV services.

We Are Driving Progress
We are making steady progress. Our work in Zimbabwe illustrates how dramatically we have reduced the threat of pediatric AIDS in sub-Saharan Africa. When EGPAF began working in that country in 2001, the rate of mother-to-child transmission of HIV was nearly 30 percent. By 2009, that rate was down to 18 percent. Then in 2011, it was at 8.8 percent. It is even lower than that now.

Similar progress can be seen across Africa, with a rapid decline of new infections among children by 50 percent or more between 2009 and 2012 in Botswana, Ethiopia, Ghana, Malawi, South Africa, and Zambia. More than 62 percent of HIV-positive women around the world now have access to PMTCT services.

We Are Bridging Gaps
The successful delivery of PMTCT services requires a cascade -- an integrated continuum of care. This includes universal HIV testing and counseling for expectant mothers, followed by accessible and affordable antiretroviral therapy (ART). It means that women living with HIV can easily get to health facilities in which the staff is trained and equipped to deliver their babies.

The PMTCT cascade continues after birth, with infant diagnosis of HIV and antiretroviral treatment for those children who have been infected. Finally, health facilities must have systems in place to follow-up with mothers and infants, retaining them on treatment if appropriate.

Inefficiencies or gaps in the PMTCT cascade diminish the number of HIV-positive mothers who receive treatment. The results of those failures are more infants infected with HIV, more HIV-positive children who do not receive treatment, and more children who die of AIDS-related illnesses. And it means that more mothers remain vulnerable to fatal AIDS-related illnesses.

For the past decade, our programs have expanded to better address the PMTCT cascade. Our work must continue around strengthening and integrating health systems and building local capacity so that every child has the opportunity to grow up HIV-free. And we must continue our pursuit of lifelong treatment for infected individuals so that once a mother or child has been diagnosed with HIV, the mother can look forward to raising her healthy child and both can live a full and healthy life.

Having reached our 20 millionth woman with PMTCT services, we have earned the right to a brief pat on the back.

But we need to also immediately think of an HIV-positive woman whom we did not reach on that day. What were the circumstances that prevented her from receiving lifesaving treatment? Does she live too far from facilities that test and treat for HIV? Did a stock-out prevent her from receiving antiretroviral medication? Did stigma and poor information in her community deter her from seeking testing?

Our job is to reach that woman -- until no child has AIDS.