The recent death of Harambe, a silverback gorilla at Cincinnati Zoo that was shot dead after a boy fell into the gorilla enclosure has triggered a fierce debate. 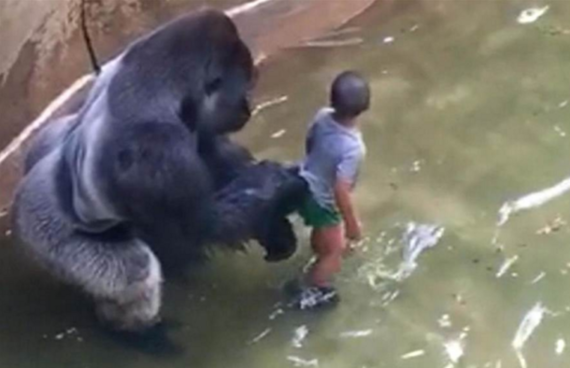 (Image courtesy of clucthmagazineonline.com)
Our reactions to this tragic incident has been very polarized. Some expressed fury at the zoo's decision to kill the gorilla and rallied behind the "justice for Harmabe" tag, while others called for charges against the three year old's mother. And in perhaps what is a reflection of the hypocrisy and intolerance hidden in us, many others trivialized the death of the 17 year old Gorilla.

"It's a Gorilla; Get Over it" read the title of one column, while another called the decision to shoot the gorilla an obvious one.

Just a day after the incident, the child's mother took to social media to defend herself from criticism, but did not think Harambe deserved a word of condolence. To the prosecutor who refused to press charges against the child's mother, it didn't matter that Harmabe is a fellow primate with 98% genetic similarity with humans, he was still an animal.

So what if Harambe is "just" a gorilla? They are self-aware sentient beings that share many of our traits like having complex emotional feelings and a desire for social groups. Recent studies show that gorillas too make tools like our ancestors.

What justifies the superiority of humans over gorillas? Is it our better intelligence? But if we are going to value individuals based on their intelligence, we will be condoning the killings of intellectually disabled persons, something no civilized person would find acceptable.

It is also equally arguable that the life of an animal belonging to a critically endangered species, like a silverback gorilla is worth more than the life of a member of an overpopulated species.

Ironically, those who mock the outpouring over the death of Harambe are the very same people fighting racial intolerance. "Black Lives Matter" activists who believe the protests over the shooting of the gorilla is misplaced because in their eyes the shooting of unarmed black men do not result in comparable protests are not only factually wrong but are unwittingly justifying the mentality that discriminates those different from us -- whether "those" belong to a different species or a different race.

The endless debates that have hogged the social media since the fateful Saturday cannot bring Harambe back to life. But the least we can do is to recognize and respect the sentient beings we share this planet with, irrespective of whether they have a name Harmabe the gorilla or Cecil the lion, or they get sliced anonymously into our sandwiches.