A note to scientists: If you're going to criticize previous work, at least make sure you've read it carefully. There is an unfortunate recent case in point that I'd like to discuss (full disclosure: it regards a criticism of some of my own recent work). But first, a bit of background and context.

A few years ago my colleagues and I published an article (henceforth 'MFR12") in the journal Nature Geoscience, suggesting that tree-ring reconstructions of past temperature changes may underestimate the response of the climate to the few largest pre-historic volcanic eruptions during the past millennium. Here's the abstract of the paper (you can find a more detailed discussion of the paper at the climate science blog RealClimate):

The largest eruption of a tropical volcano during the past millennium occurred in AD 1258-1259. Its estimated radiative forcing was several times larger than the 1991 Pinatubo eruption. Radiative forcing of that magnitude is expected to result in a climate cooling of about 2 °C. This effect, however, is largely absent from tree-ring reconstructions of temperature and is muted in reconstructions that employ a mix of tree-rings and other proxy data. This discrepancy has called into question the climate impact of the eruption. Here we use a tree-growth model driven by simulated temperature variations to show that the discrepancy between expected and reconstructed temperatures is probably an artifact caused by a reduced sensitivity to cooling in trees that grow near the treeline. This effect is compounded by the secondary effects of chronological errors due to missing growth rings and volcanically induced alterations of diffuse light. We support this conclusion with an assessment of synthetic proxy records created using the simulated temperature variations. Our findings suggest that the evidence from tree rings is consistent with a substantial climate impact of volcanic eruptions in past centuries that is greater than that estimated by tree-ring-based temperature reconstructions.

At this point, you might rightly ask, "why should I care?". After all, this might seem "down in the weeds" of science, a rather technical and arcane matter that might be of interest to a small group of scientists, but which hardly holds any implications for the person on the street.

But that would be wrong. One of the reasons this matter is important is that changes in temperature during the past millennium represent one important line of evidence for estimating how sensitive our climate is to ongoing carbon emissions and elevated greenhouse gas levels comes from looking at simulations of the more distant past and how they stack up against model simulations. How well the simulations match the actual observations informs our assessment of how reliable those same models are in predicting future warming due to human activity. This "sensitivity" is often measured by a quantity known as the "equilibrium climate sensitivity" (see e.g. this discussion in Scientific American).

The equilibrium climate sensitivity (or "ECS" for short) measures how much the globe is likely to eventually warm in response to a doubling of atmospheric CO2 concentrations relative to pre-industrial levels (at current rates of fossil fuel burning, we will reach those levels in a matter of decades). It also characterizes the response of the climate to other external factors, including the cooling effect of explosive volcanic eruptions.

One way of estimating the ECS involves varying its value in climate models until the model simulation best matches the observations. The value of ECS that yields the closest "fit" to the observations is inferred as an estimate of the most likely value of ECS. As shown in the figure below (from my 2014 Scientific American article), this approach can be applied to various different target observations of current and past climate variation, including for example the cooling during the height of the last ice age. But one line of evidence in particular--temperature changes over the past millennium--seems to be the outlier, yielding a substantially lower ECS (only ~2C) than the other lines of evidence (~3C). 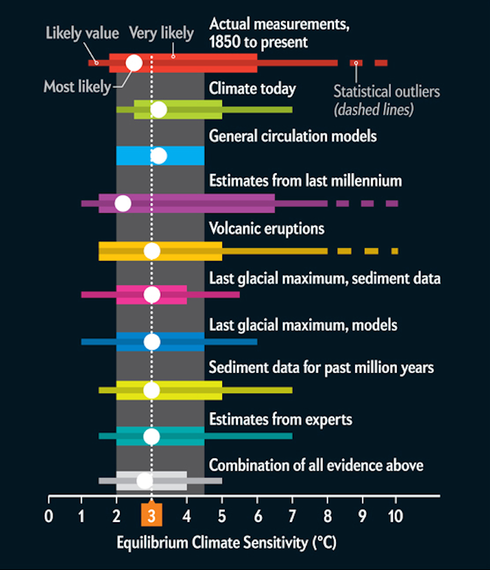 This matters! An ECS of 2C would imply substantially less warming over the next century than an ECS of 3C. We have shown in subsequent work that the apparently lower ECS value from paleoreconstructions of the past millennium may be an artifact of the aforementioned underestimation by tree-ring data of very large volcanic cooling events. In essence, because the paleoreconstructions suggest such muted cooling following the few largest volcanic eruptions (i.e. AD 1258 and AD 1815 events in particular) compare to what a climate model with a typical (i.e., ~3C) ECS would suggest, one is forced to lower the ECS value to fit the observations.

Relevant to this matter, a new article in press in the journal Geophysical Research Letters by Tingley et al, claims to contradict the findings of MFR12. Quoting from the abstract:

The fidelity of inferences on volcanic cooling from tree-ring density records has recently come into question, with competing claims that temperature reconstructions based on tree-ring records underestimate cooling due to an increased likelihood of missing rings, or overestimate cooling due to reduced light availability accentuating the response. Here we test these competing hypotheses in the latitudes poleward of 45° N, using the two eruptions occurring between 1850 and 1960 with large-scale Northern Hemisphere climatic effects: Novarupta (1912) and Krakatau (1883). We find that tree-ring densities overestimate post-volcanic cooling with respect to instrumental data (Prob. ≥ 0.99), with larger magnitudes of bias where growth is more limited by light availability (Prob. ≥ 0.95). Using a methodology that allows for direct comparisons with instrumental data, our results confirm that high-latitude tree-ring densities record not only temperature, but also variations in light availability.

Industry-funded climate change deniers are reliably on it, seizing on just about any apparent disagreement between scientists to confuse the public when it comes to the reality and threat of climate change.

Yet, there isn't actually any real disagreement here at all. The authors of the new article, it would unfortunately appear, have failed to read our work carefully. For if they had, they would know that (a) Mann et al (2012) analyzed and modeled tree-ring growth thickness, while the present authors are instead looking at a completely different tree-ring variable, tree-ring density. Though later work alludes to the possibility that there may be a similar underestimation problem in certain compilations of tree-ring density, none of the observations, modeling, or conclusions of MFR12 have anything to do with tree-ring density. It is unclear what, if any, of the MFR12 conclusions about tree-ring growth thickness apply to tree-ring density, since the processes that influence the two different tree-ring variables are markedly different.

But there is another equally important, if not greater, problem. The MFR12 conclusions apply to the few largest eruptions of the past millennium. Only for those eruptions (i.e. AD 1258, AS 1453, and AD 1815), do MFR12 predict a significant likelihood of missing growth rings (see top figure below) and a significant underestimation of post-volcanic cooling by tree-rings (see bottom figure below). For the 1883 Krakatau eruption, at most 5% of series are predicted to be potentially missing growth rings. For the 1912 Novarupta eruption, no missing growth rings are predicted at all. 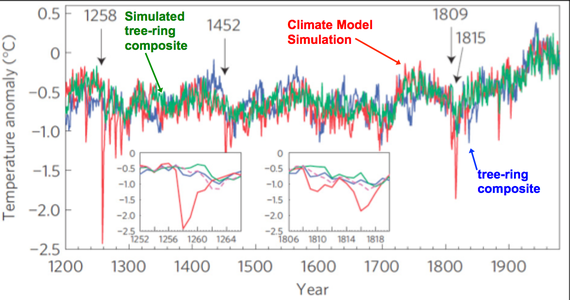 MFR12 predict little or no impact since the late 19th century, as seen above, because human-caused global warming had already warmed the climate relative to pre-industrial levels such that even a large volcanic eruption was no longer sufficient to place trees below the estimated summer growth threshold in our modeling experiments. So analyzing the response to the 1883 and 1912 eruptions has little if any potential to address the actual MFR12 predictions. It is a shame that Tingley et al have implied otherwise, and that this error has already fed a misleading, contrarian climate change narrative.

Finally, it should be noted that comparisons using the state-of-the-art "CMIP5" climate model simulations employed in the most recent report of the Intergovernmental Panel on Climate Change (IPCC) indicate that paleoreconstructions and model simulations of the past millennium are consistent if and only if the few largest pre-historic volcanic eruptions are masked from the comparison. Otherwise, the model simulations overestimate the amplitude of variation relative to the reconstructions. This provides fairly clear, independent evidence that the tree-ring based paleoreconstructions do indeed show less cooling in response to the few largest pre-historic volcanic eruptions than indicated by state-of-the-art model simulations. Tingley et al fail to confront or address this evidence, which runs contradictory to their thesis.

There is a vigorous and worthy debate that continues to take place in the scientific peer-reviewed literature regarding our original tree-ring/volcano hypothesis (see e.g. this comment/reply, this more extensive summary and discussion and this recent piece). I welcome that ongoing debate. It is the healthy, "self-correcting" machinery of science in action. But the new Tingley et al article does little to inform that particular debate, despite claims to the contrary.

Unlike fake, manufactured debates about whether climate change is real or human-caused or a threat (there is an overwhelming scientific consensus that it is each of those), there are real, important, and far-reaching debates that are still taking place within the scientific community about some important details of the science. Let's stay focused on the legitimate disagreements and discrepancies, for they are important and unnecessary distractions only complicate the already-challenging effort to inform the public discourse on climate change.