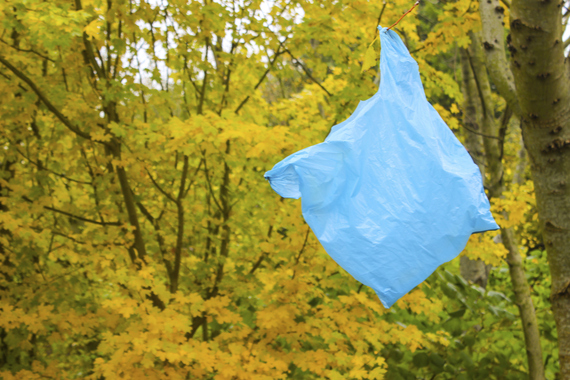 We've all been there: You get to the front of the grocery line with a shopping cart full of food only to realize that the reusable bags you intended to use are still at home. It's so easy to kick yourself and then reluctantly start bagging away in plastic, but there's a better solution: Carry it home by hand.

We know, we sound crazy. But according to Beth Terry, author of Plastic Free, the schlepp is worth it. "It requires repetition to create a new habit," says Terry. "It's not a punishment for forgetting, but a way to reinforce the new behavior you want to develop."

Terry tells the story of how she was once grocery shopping and forgot her bags and couldn't find any non-plastic alternatives in the store. "Finally, we ended up holding our T-shirts out in front of us to transport our apples, oranges, avocados, and melons. Embarrassing? Yes. Extreme? Depends on who you ask. But also fun. We came home with a funny story to tell."

And you can bet that they never forgot their bags again.

Need a little more incentive to always keep a reusable bag on hand? How about 12 reasons to make sure you do it?

#1: "Free" bags cost you $88 a year. Sure, you can double-bag your heavy items and your grocery bill won't go up a dime, but that doesn't mean you aren't paying for it. According to the Plastic Pollution Coalition, each taxpayer pays 17 cents per bag for clean-up costs, which total about $88 a year. Even organic cotton or hemp tote bags don't cost that much.

More: How to Make Your Own Upcycled Farmer's Market Tote

#2: Plastic bags account for 12 percent of marine debris. Out of the 6.8 million pounds of ocean trash cleaned up annually by the nonprofit Ocean Conservancy, 12 percent is plastic shopping bags. Considering that bags typically don't even weigh an ounce, 816,000 pounds is a whole lot of bags.

#3: The amount of plastic we've lost track of is mind-blowing. Edward Humes, author of Garbology, says that our plastic trash outweighs the entire U.S. Navy. "The plastic trash we lose track of is comparable to losing 40 Navy aircraft carriers' worth of plastic at sea every year," Humes says. Maybe that's because the average American uses 500 plastic bags a year.

#4: 86 percent of sea turtles have plastic in their intestines, according to research from New Zealand's University of Queensland. Wild animals that eat plastic bags (that easily blow into natural habitats) often die when the plastic blocks their intestinal tracts. Cat owners, if your cat has ever eaten a hole in a plastic bag, you know how unpleasant (or even dangerous) it is when it comes out the other end.

#5: 99 percent of seabirds will have eaten plastic by the year 2050, according to Australian researchers. Nine out of 10 seabirds already have plastic in their system. "This is a huge amount and really points to the ubiquity of plastic pollution," says Chris Wilcox, PhD, principal research scientist at the Commonwealth Scientific and Industrial Research Organisation in Hobart, Australia. The researchers point out that birds are particularly vulnerable becaus they are drawn to colorful items floating in the sea.

More: Is Your Workout Gear Toxic?

#6: Every piece of plastic that was ever made still exists. Sounds like an exaggeration, but the fact is, plastic doesn't biodegrade. The evidence is the Great Pacific Garbage Patch. This Texas-size patch of plastic trash isn't an easy-to-spot island; it's a "peppery soup" of churning plastics.

"There are many different kinds of plastics out in the ocean, and they come from a number of different sources," explains Dianna Parker from the NOAA Marine Debris Program. "So, there are teeny-tiny micro plastics out there that were either manufactured to be small—for example, the microbeads in face wash can be plastic; there are also little, tiny plastic pellets that we sometimes call 'nurdles' that are used to make larger items, but then there are also tiny plastics that are shards of larger items. Plastics never really go away. They just break down over and over and over again until they become smaller and smaller from sunlight and other environmental factors [like] waves, big storms, those kind of things."

Live happy. Be healthy. Get inspired. Join us and discover the best ways to get fit, be well & live your life to the fullest.