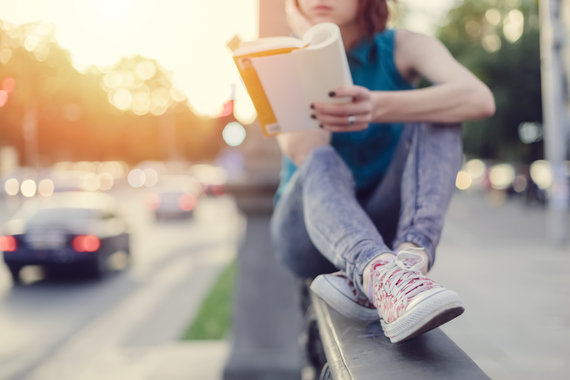 Twenty-eight percent of American adults say they have not read a book in the past year - book as in words... be it digital, print, whatever. And while I don't know the matching statistics globally - help me if you can by checking your country's stats - I imagine most of us are facing the same sad fact.

Sad as in this isn't a print vs. digital coup or a traditional vs. new triumph or some Luddite vs. leading-edge victory... it plainly and simply means some people are just not reading, and I find this profoundly disturbing and potentially harmful to the future evolution of humanity.

According to last week's New York Times, "Sales at bookstores rose 2.5 percent in 2015 over the previous year, to $11.17 billion, for the first annual increase since 2007, according to the United States Census Bureau."

And, as I have written before about the increase in sales of children's printed books...all over the world...a trend I find exciting, powerful and a sign of hope for the future, as parents rediscover the joys of a fully tactile, immersive, interactive experience that involves and benefits both the reader and the audience.

Tell the truth! Have you bought a book recently... digital or otherwise? Read it? Enjoyed it? Experienced it? Immersed in it? Shared it? Old author or new... it makes no difference.

Full confession time - as one who used to haunt bookstores and buy tens of books at a visit, and then, as time moved on, download even larger quantities to my Kindle and then my Kindle App, I find that I have slacked off.

Maybe it was time... I had so much "content" to cover; maybe it was fatigue... how much could I really absorb; maybe it was lethargy... who cares because I'm reading short summaries of everything.

And, my sense is that I'm not alone.

You see, Amazon, which killed bookstores, is now opening bookstores... and therein is the insight and hope for the future as they know everything about us, no?

Seriously, it is no longer embarrassing to buy books - to say you read them, to save them, to savor them, to share them - physically or otherwise.

It's OK to shut down for an hour or so and read - undisturbed by beeping and clicking and popping and flashing. In fact, as my readers know, I unplug every week for 24 hours and in that unplugging, I reconnect, not only with my family, but with books.

Bookstores are even coming to you - in an ode to an age when books were not as readily available as they became, mobile bookstores are making a reappearance:

The bright blue bookmobile, which hit the road this week, is a roving offshoot of Parnassus Books, a popular independent bookstore. It will roam around town, stopping at food truck rallies, farmers' markets and outside restaurants. - The New York Times

And as Alexandra Alter - author of the article - writes, there is a growing trend:

"The trend is unmistakable, and we see it not only continuing but growing," said Oren Teicher, the ABA's chief executive.

Seems to me the real insight here is that we are beginning to get more comfortable with ourselves and technology.

Make no mistake - the digibabblists are still out there berating us; telling us that we have to abandon the old ways; leave them behind forever for the new; forsake all that works for that which might; be ashamed if we haven't reduced our entire lives to a handheld device....

And yet, the niche category of vinyl records is generating more profit for recording artists than all of the streaming and YouTubing of their songs...driven by a young new audience not afraid to mix and match their passions.

But the Digibabble message is getting stale and its influence will wane as more and more so-called digital natives begin to realize it's not one or the other; it's not a battle (except for the Digibabble crowd who needs to monetize our usage); there is joy and learning and, yes, experiential opportunities yet to be discovered in what was and none of it takes away from what is.

Warby Parker is a great example of this trend.

A company that began with the analysts predicting disruption and a complete rout of the eyewear category hopelessly chained to storefronts began opening its own physical locations. Neil Blumenthal, the founder, had a flash of inspiration and insight when they ran out of inventory and their friends came to try on glasses in their living room...listen:

We launched and the company took off like a rocket ship. We had to suspend our home-trial program because we ran out of inventory. People started calling and asking: "Can I come to your office to try on some styles?" We were working out of our apartment. So we invited people over. That was our first foray into [brick-and-mortar]. It showed us that we could create really special experiences with individuals when we meet them in person.

As we create for our clients; as we develop for our customers; as we craft and fashion for the use of our target audiences - think people...think real experience and go buy a book...physical or otherwise...but I do recommend from a bookstore....

P.S. Check out a most amazing server, the likes of which we have yet to see in our world: Shakespeare's Folio (Shakespeare, the Book Tour), without which we would not have many of his plays - a novel thought in an age when every inane remark made online has a millennium shelf life...

According to Michael Witmore, director of the Folger Shakespeare Library, which is honoring the 400th anniversary of Shakespeare's death by sending the Folio to all 50 United States:

In a moment where information seems to be everywhere...it's startling to be reminded that the sole conduit of some of these incredibly influential plays is a physical object made out of rag paper.

Inspired me to reread Macbeth....

N.B. Think about this - book readership is down but sales in independent book stores are up and sales of children's books are off the charts - meaning that someone is reading - I call your attention to the Waldorf Schools and the Google elite that send their children - there is a new competitive edge being developed in the world and it is sans Digibabble. Don't be left out.

Franz Kafka put it best for the world that we live in, where we too often seem to be locked into technological paradigms.

A book must be the axe for the frozen sea within us. - Franz Kafka

And one final thought from one of my favorite sources...

Outside of a dog, a book is man's best friend. Inside of a dog it's too dark to read. -- Groucho Marx