The 2009 movie Inglourious Basterds by Quentin Tarantino tapped into the emotionally evocative power of revenge fantasy. The movie was a smash hit not only because the children and grandchildren of survivors of the Nazi death camps could relate to it, but because Hitler in the minds of many represents the paragon of evil. A movie that lets the viewer live out a successful overthrow of his regime in sweeping views of revenge colored with the blood of dead Nazi soldiers is a fantasy many audience members let themselves revel in.

The truth is though that power is never so uncomplicatedly simple as a revenge fantasy makes it out to be. It is the rare moment indeed that the oppressed can so simply, without any moral calculation, rise up against the aggressor. The exercise of power is almost always about assessing risk, reward and moral cost. Power in the real world lives in tones of gray, rarely ever getting to luxuriate in the brilliant light of the innocence of the black or white decision. 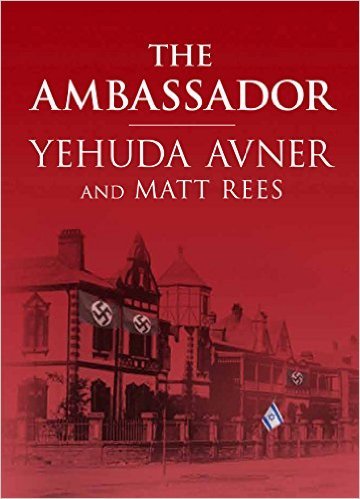 The late Ambassador Yehuda Avner (d. 2015) and the award-winning novelist Matt Rees have authored a work that stirs the mind and imagination in ways that are never simple or comforting. In fact, the opposite is true. To read their novel, The Ambassador, is an act of being made very uncomfortable. The book quiets notions of easy acts of bravery in the face of overwhelming evil. It disrupts the good versus evil storyline that we, as viewers and readers, have come to expect and yearn for.

The Ambassador presents an alternate history that, at first, seems exhilarating, but as one continues to read becomes increasingly fraught with tension and moral dilemma. In their work the State of Israel was born before the Holocaust. The fledgling Jewish state must grapple with the fast rising world power of the Third Reich, with its anti-Jewish program of persecution, deportation, intimidation and one day soon attempt at mass genocide.

Where the author Erik Larson presents the factual account of the American Ambassador to Nazi Germany within his novel, In the Garden of Beasts, Avner and Rees present the obvious fictional account of the first Israeli Ambassador to Nazi Germany. What does it mean to be the representative of a state, an entity with both soft power of diplomacy and hard military power, to a country dedicated to your demise? How do you both serve your position and serve your people at the same time? Can a state fighting against a tyrannical murderous regime bent on hate also become negatively impacted by that same force of hate?

The reader who is accustomed to easy endings and simple solutions will find this book not their cup of tea. However, for the reader who is ready to embark down the path of real diplomatic quandaries and grapple genuinely with questions of power and morality this book will spark those conversations. The notion of an alternate history fiction being written by one of the world's most respected ambassadors brings a depth of experience into the writing that makes the narrative realistic and within the confines of what real state actors and diplomats would wrestle with.

This book very well might not be good beach reading material but it is required reading for all those interested in the nature of power, freedom and the moral costs to human agency, even when that action is grounded in the best of intentions.