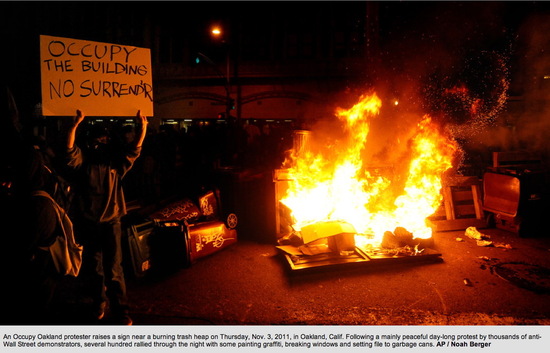 Shame on the Sacramento Bee for attributing the violence late Thursday night to Occupy protesters when the chaos was clearly and identifiably the responsibility of an outside contingent of black bloc agitators sporting black shirts, bandannas and backpacks for their spray paint, sticks, clubs, fire retardant and other equipment.

What's strange is that The Bee makes the distinction itself with its headline, "Occupy protesters disavow Oakland violence." From there, though, they undo the difference by repeatedly referring to these hooligans in their photo captions as "Occupy protesters." (See most of the first ten photos of the slide show.) This is most evident in the photos of the black shirts that took over a building late that night. In the photo above, by the way, notice the phrasing of the caption (describing how they "occupied" -- rather than "took over" or "commandeered" -- the building) linguistically connecting the actions of this militant element to the name of the non-violent movement.

What's very dangerous, at this point, is the media neglecting to educate the public about the nature and source of the violence -- as CBS clearly does here. It's a development we warned about weeks ago. It doesn't take too many errors of omission to convince a large swath of the American people that Occupy, itself, is a powderkeg. 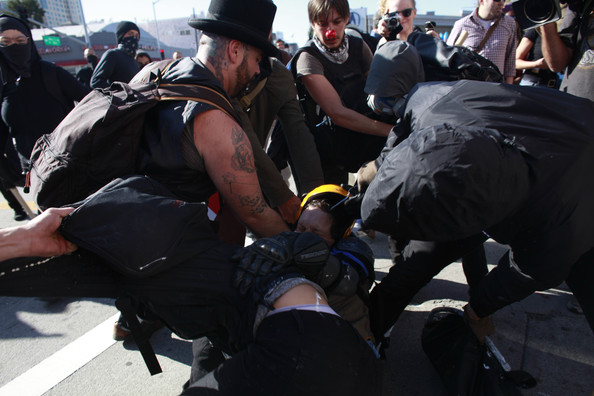 It wasn't just The Bee, though, which fed the misrepresentation. Consider this photo from a Getty package at Zimbio. In the photo, we see an Occupy security member (the same one who was overrun in this video we highlighted last week, and seen again here) being manhandled by the black shirts. Thing is, when you read the caption:

Demonstrators clash during an Occupy demonstration November 2, 2011 in Oakland, California. The group called for a general strike Wednesday, and planned to march on the city's port later in the day.

what you get -- far from the sense of a struggle between Occupy and these violent outside agitators -- is they're all one family, and looking for trouble.