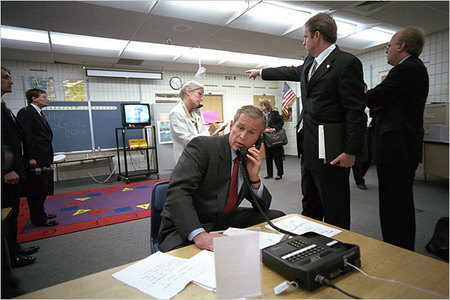 Although I had seen this photo before, the fact it showed up in Monday's NYT "Goodbye Karl" slideshow caused me to take a closer "visual forensic" look. The photo, as you can tell from the clock and the TV screen, was taken at 9:25 am on the morning of 9/11/2001 at Booker Elementary School in Sarasota, Florida.

Although everyone in the world, it seems, is familiar with the "Pet Goat" photos, I think this one -- though far lesser known -- is as much, if not even more scandalous.

Given the detailed timelines available from that morning, we know well how George Bush spent 10 very long minutes reading a story to a group of second graders. He entered the classroom room at 9:03, and he was informed at 9:06 by Andy Card that a second plane had crashed into the World Trade Towers, but he didn't finish up with the kids until 9:16.

What is much less familiar, however, is how Bush spent the next fifteen or twenty minutes. After taking another minute or two to speak with the teacher and principal after the reading exercise, Bush and company made their way into this adjoining classroom. Once there, Bush spoke with Condi Rice (check), then Dick Cheney (double check), then New York Governor Pataki (check again). What is most remarkable -- both about the photo, and Dubya's subsequent decision making -- however, are those pages in front of him.

According to his original pre-"attack on America" schedule, Bush was slated to give a speech to the Booker Elementary student body at approximately 9:30. So, thirty-nine minutes after the first crash (which Bush was aware of by approximately 8:55); and nineteen minutes after hearing about the second crash; and with the fate of America supposedly hanging in the balance, what do you suppose Bush had in front of him and was working on?

Yep, it's the speech he ended up writing, then delivering, four minutes later to 200 elementary school students, along with some teachers and a handful of reporters.

If Bush's actions confirm his incompetent, pre-formulated, performance-by-rote, what, in addition, might the craft and composition of the photo indicate? In this moment of extreme crisis; 13 minutes before Flight 77 would slam into the Pentagon; with the atmosphere rife with speculation that numerous highjacks were in progress, can anybody say there wasn't still time for posing?

Only White House photographer Eric Draper could tell us for sure, but with the President centered in the shot, now seemingly down to business (because the kids must be served -- again); the American flag neatly framed under Dan Bartlett's arm; Bartlett, at that very moment, happening to point out the replay of the WTC attack (as if to say, we're on it!); Deborah Loewer, director of the White House Situation Room, doing her situationing perfectly situated behind the boss; and with the two suits to the left standing at attention and ready for action, I'd say this scene is strangely burdened by the sense of what it is supposed to look like.

And then, fast forward to the present, and here the picture is again, this time innocuously inserted in the New York Times "farewell Karl" slideshow. But with no one the wiser, it serves to function as historical propaganda, as an apparent counterpoint to "The Pet Goat" -- rather than what it really evidences, which is more of the same.

Oh yes, then there's Karl himself. Funny how he's at the back again -- with his arms folded when everybody else is now busy in "first responder" mode, using their appendages to point or write or conference. But then, arm folding in the middle of an action scene is also taking action, isn't it?

I mean, isn't that what directors do?

For more of the visual, including photographer Alan Chin's latest images from New Oreleans, visit BAGnewsNotes.com.