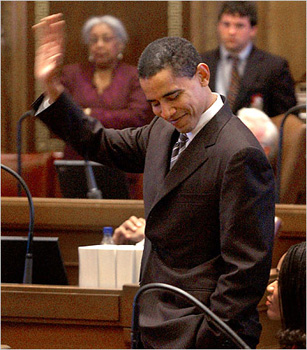 Is there some rule somewhere that says that big media is required to publish every cheap piece of opposition dirt? Or, is this latest gem -- smack on today's NYT front page -- justified simply to hype the drama as we approach D-day in Iowa?

It is not sad enough the Times had to publicize how Obama voted "present" 3.25% of the time in the Illinois legislature -- rather than " taking a stand." (That, when the article also explains how a "present" vote is often a routine tactical or procedural move in that body.) No, what is more troubling is how the article uses photographs to create a more toxic visual impression of the smear.

The article contains two photos working in tandem. The lead shot shows Obama in the Illinois State Senate waving his hand and looking downward. Paired with the article, and its headline "Obama's Vote in Illinois Was Often Just 'Present'," the read is that Barack is voting "present" and then feeling sheepish about it.

From the rather ambiguous caption, however ("Barack Obama leaving the Illinois State Senate in 2004"), what is more likely the case is that Obama is reacting with pride, and a little embarrassment, to recognition and even applause for his service in that chamber .

But that's not all. 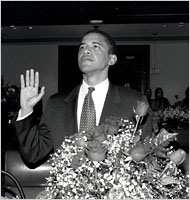 Further down the left column is a 1997 black-and-white image of Obama being sworn in as state senator for the first time. Following the bias of the story, the headline and the first image, the way the second photo reads, with Barack's hand only half-raised (which is what you do when you pledge, as opposed to vote) is that Obama has somehow made a career out of failing to commit.

... Now, exactly what was Bill Clinton saying the other day about swiftboating?