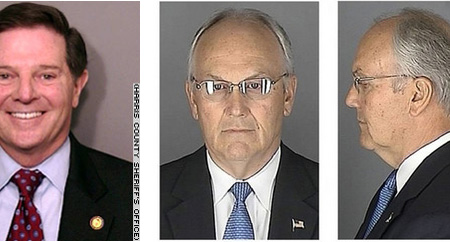 Surely, you're familiar with that power-tripping phrase: "Are you going to believe me, or your own eyes?"

This Administration has consistently avoided judgement by defying expected norms of reaction and standard emotional cause-and-effect.

... What that means is, if a guy does wrong and that wrong catches up to him, we are neurologically wired to expect a certain type of behavioral response. That reaction -- be it oral and tonal, or facial and gestural -- could be anything within a familiar spectrum, ranging from contrition or shame on one end to defensiveness or defiance on the other. The completely subversive thing about this Administration, however, is that, with as much damage as they've done, one would barely recognize it because the physical and emotional indicators the key players display bears so little sign of impertinence toward laws, ethics, and moral standards, or much hiccup, at all, at the level of personal conscience.

That's why it's such a relief to me to see Senator Craig in these mug shots.

Craig's expression, playing out below or just short of the camera eye, appears to say "I'm not here. ... And because I don't see you, I'm expecting (in my little bubble) you won't see me." In the profile, his gaze appears downward. Accordingly, we (as creatures each equipped with a set of emotional antennae) are trained to consider -- through instinctive, psychological pattern recognition -- a set vocabulary of corresponding emotions. Likely in the expressive mix -- and easier to recognize if you happened to listen to "Larry on tape" yesterday -- are qualities of shame, denial and rationalization.

Extreme narcissists, like sociopaths, however, just don't come with that kind of emotional programming. So while the world, based on their direct actions, could be on its way down in flames, what you are likely to see, even if judgement day is closing in on them, is a completely incongruous disconnect between the actor, his actions and his reactions.

Unfortunately for the country, the fact that you can get a mug like the one DeLay provided for his perp portrait, or ones like this or these, in the face of blatant wrongdoing and rampant abuse of power, sends a psychological signal, at a deep cognitive level, that nothing seems so wrong.