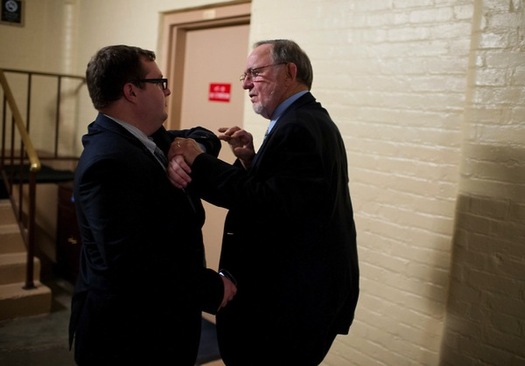 Between the "Political Pictures of the Year" slideshows at Politico and Roll Call, there are more dramatic images than the ones in this post. A shot of Obama hugging a nurse who just recovered from Ebola was widely circulated, for example, as well as a group portrait of Black congressional staffers on the Capitol steps standing in solidarity with national protests over the deaths of Eric Garner and Michael Brown. Against those moments of drama, photos like these pass silently into the ether.

Which raises the question: If our broken political system represents the greatest threat to the American enterprise and this country's future, where are the pictures? Why wouldn't this debacle be the source of endless feature images, slideshows, photo galleries of shame? And where is the documentary work and the media coverage of that work more systematically documenting such a disreputable state of affairs?

As a token gesture in that direction, here are three images culled from these two slideshows -- buried in the avalanche of year-end slideshows -- that quietly illustrate the morass. The caption from the photo above reads:

Rep. Don Young, R-Alaska, confronts an aide who tried to stop him from entering the side door of a House Republican meeting in the Capitol, July 31, 2014. Members are not supposed to use the side door when a meeting is in progress. Young was eventually allowed to pass.

According to Wikipedia, Young, who joined Congress in '73, is the the fourth most senior U.S. Representative and the most senior Republican. In that write-up (beyond notations of ethical issues and his equating of art with pornography), is a tidbit, via The New Republic, that Young is known for "sharp elbows." Without knowing more of the details, it speaks to the disregard for rules and protocol. 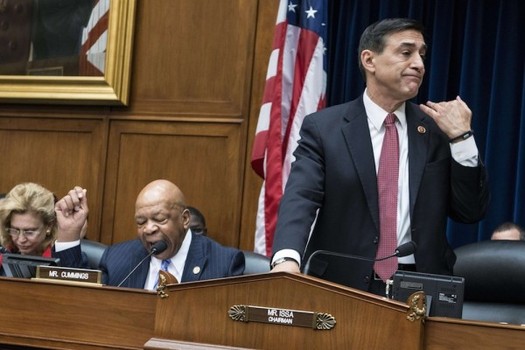 Committee chairman Rep. Darrell Issa (R-Calif.) cuts off ranking member Rep. Elijah Cummings (D-Md.) during a hearing of the House Oversight and Government Reform Committee on Capitol Hill on March 5. Issa only allowed his own questions of witness Lois Lerner, former director of the Tax Exempt and Government Entities Division at the Internal Revenue Service, during the hearing to see if the Internal Revenue Service has been targeting U.S. citizens based on their political beliefs.

One might argue this shot is more ambiguous, the management of speaker's time by committee chairmen allowing for all kinds of signals. In the larger sense though, Issa's gesture has a chilling quality to it, more so considering the fact that the IRS targeting controversy turned into a complete political football. The photo is not just about the breakdown of decorum, poorly feigned, but about two parties in close quarters in completely separate universes. 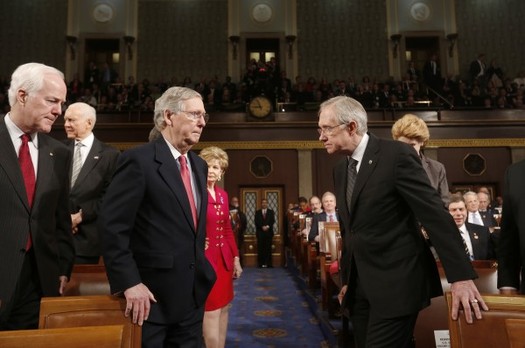 To their credit, Politico did lead its slideshow with this shot, combining personality drama -- between incoming GOP and outgoing Dem Senate leaders -- with the iciness of the political climate. (Talking cynicism, McConnell and 2014 highlights, by the way, this campaign photo is not to be missed.) Capturing the classic symbolism of the parties separated by a center aisle, the space between is arguably America's most contested border.