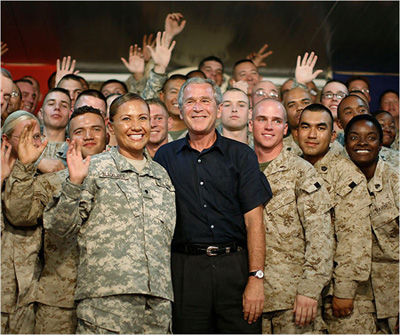 I don't know why more isn't made of the White House tactic of hauling off -- in effect, kidnapping -- the traveling press on these thoroughly-scripted Iraq dog-and-camel shows.

In the style of other engineered "forced disappearances," converting the visual media into a literally captive audience during these so-called "surprise" detours does, however, offer a choice opportunity to survey this administration's main product -- plasticized and surreal impressions that misdirect the public mind.

In this case, for example, the president is not secreted away for a few hours in a runaway, force-occupied country with young and expendable flesh-and-blood soldiers. Instead, in line with all the supposed improvement in his war of liberation, the Commander - And - Chief Mouseketeer has spirited off to Disney World to tout his gains with the shiniest and most effervescent children he could pick out of the melting pot.