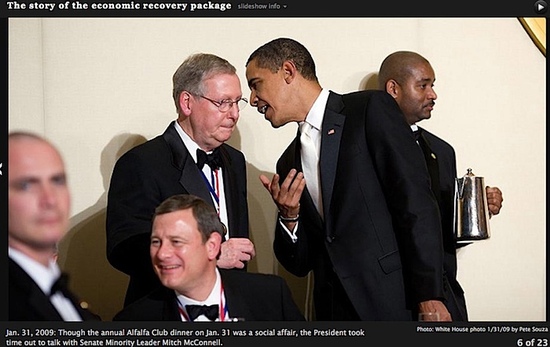 "Can Obama meaningfully reach out to the Republicans after November 2nd?" "Is Obama really ready to engage in bipartisanship?"

The "White House Memo" column fronting Monday morning's NYT (Obama's Playbook After Nov. 2) is simply mind-boggling. It paints a picture of Obama as unwilling to work with the GOP, leading off with the assertion it took the President eighteen months to formally engage Republican Senate honcho, Mitch McConnell. Has Obama's "post-partisan" obsession simply vanished from the memory banks? As a memo to the author, Ms. Stolberg, Mr. Obama has been practically licking Mr. McConnell's boots not just regularly, but fresh out of the gate as documented by the pictures we've been running almost since the inauguration.

Take the image above, for example. As early as two months into his term (see: "Catering to the Right") Obama has publicly been soliciting McConnell. (This photo, by the way, was taken four days after Obama had all those GOP Congresspeople to the White House, if anyone remembers that. ...You know, it was that session where the members got in the new president's face, and then collected autographs from "The One" for the folks back home.) 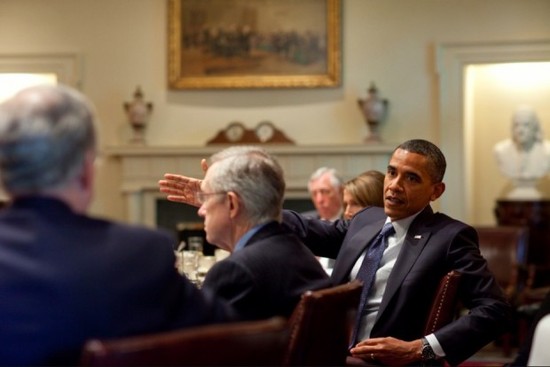 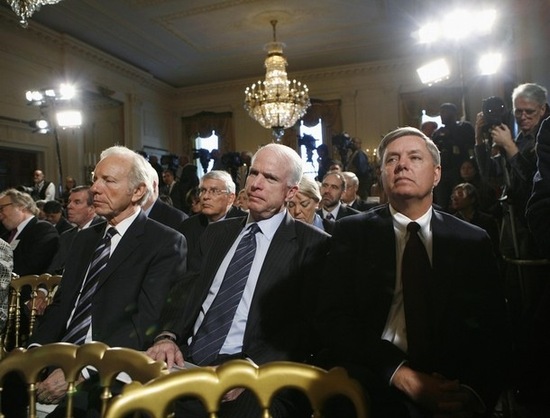 Oh, and by the way, here's the shot we ran back on February 23, 2009 (from: Bipartisanship, Continued) at still another "White House attempts kumbaya" session. (Apparently, no one remembers the attempted "Fiscal Responsibility Summit," either.) My association at the time, given the icy reception, was that the tops of the chairs looked like brass knuckles.

But then, come this November 3rd, is it really possible Obama might somehow, finally, find it in him to reach out the good Mr. McConnell? Ms. Stolberg is anxious to know.