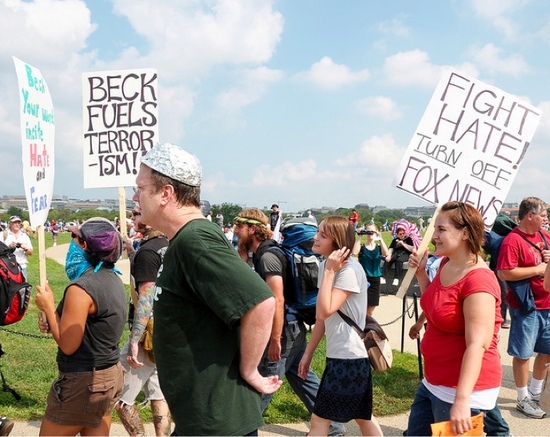 Having his "flock" refrain from bringing any signs to the praise-heavy folk rally at the Lincoln Memorial, the clever Beck did more than just conjure up the appearance of sanctity and kumbayah. He also removed the overwhelmingly hateful and poisonous signature element the media and the public has come to identify the Tea Party by. (Here's BagNewsNotes contributor Nina Berman's capture of Tea Party signs, among countless examples.)

Beck managed to take it way beyond that, however, succeeding in transferring the "sign baggage" on this pseudo-spiritual day onto the counter-demonstrators. (If you watch this TPM video, it seems the Tea Partiers were actually trained and prepared to respond to counter-demonstrators, including this offended black woman, by evoking the name and temperament of Dr. King.)

As a result -- as you can see in the Flickr photo taken by Biketripper and used by permission -- it's Dr. King's natural constituency this day that ends up sporting the tinfoil hats, and standing out for the qualities of hysteria and aggression.