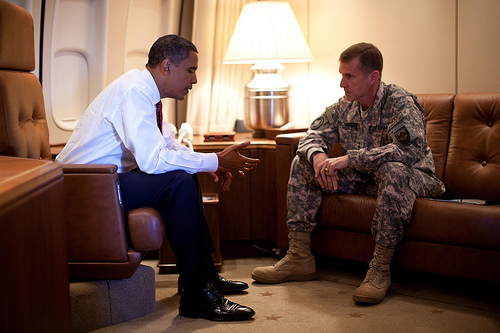 So Obama's got still another spill to deal with after McChrystal felt the need to share with a reporter from Rolling Stone?

Just so we can compare how the clean up goes this time, here are the White House visuals of Obama and McChrystal going through
the same dance last October
-- the General shooting off his mouth, Obama publicly reaming him, then both men (and wives) publicly putting on a show of BFF (except for Stanley's jocular, too-relieved look and Obama's smirk). 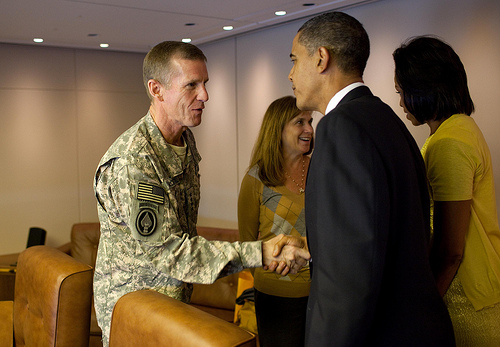 And here's still another episode of Obama putting Stanley in his place. Maybe someone in the White House convinces Obama to cut McChrystal loose. If he's true to form, though, what we'll see is a replay, with Obama -- who is more about tough love -- taking the General to the woodshed (yet again), then turning the other cheek.

Update: Okay, missed the boat on the prediction. Still, looking back, people won't remember Stanley shooting his mouth off. They'll look at the management of the unwinnable Afghan war as a game of shoot the messenger.

Here's the shot of the last victim, Gen. McKiernan, getting the boot.

For a breakdown of the latest visual spin plus the best in photojournalism, visit the completely redesigned and relaunched BAGnews.