Come the first Monday after the Nobel announcement, here's Newsweek jumping on the "he didn't deserve it and who does he think he is, anyway?" bandwagon.

That's the least of it, though. Whereas similar toxicity abounds, Newsweek pivots off the bald and ugly "undeserving" slash in the attempt to drive a high-profile wedge through the White House and in between the President and the V.P. 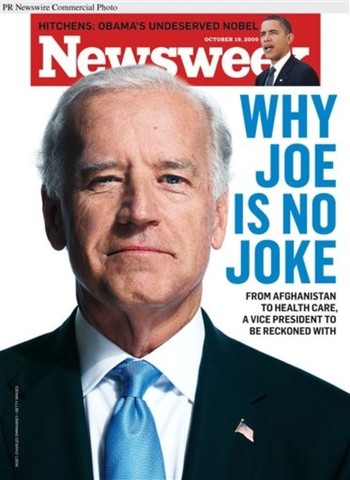 Given the lead, the relative scale and the anchor text, the suggestion here is that Obama, a more minimal figure, is suffering from an "idea" deficit and that the patriotic Biden not only towers over him from a policy standpoint but can also look you straight in the eye.

Regarding the color scheme, I'm not sure about the red, but the blue-state blue further ostracizes Obama by painting Biden as much more the party's man.

For more visual politics, including our international and domestic argument why Obama deserved the Nobel Prize, visit BAGnewsNotes.com.