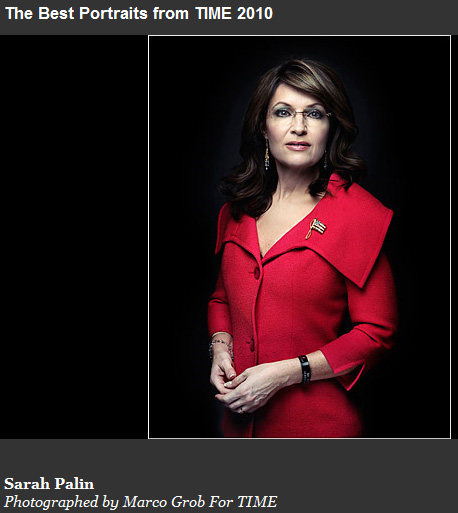 Short of talking about this photo of Kent Conrad and his dog, a picture clogging the newswires as a distraction from any clearer look on "the great tax compromise" going down on Capitol Hill, nothing and nobody owns the attention of the visual media right now like Sarah does, for better or worse.

The latest image to surface is this one, a posed portrait of SP for a Time slideshow labeled "Best Portraits of 2010."

At the risk of stirring either one of these hornet nests, however, I did collect two very different opinions about this photo. One well-trained eye, a woman I might add, felt the photo was a FAIL. Her exact words were that the photo made Palin look "like an android."  Compare that to another woman I talked to who felt the shot did well by Palin as it not only shows her giving herself seriously to the camera but also presented her "looking her age."

For my money, this photo previews and ushers a strategic shift in how Palin plans to present herself to the public as 2012 comes into view.  Call it a "high-low" approach mixing a more serious, more "presidential" image, as represented here, with that more vigorous and kinetic, more outrageous and sexy, more shoot-from-the-hip Palin we all know and love (or the opposite).  But then, if the aim of this photo is that greater depth and gravitas, the question is, how successful is it?

So far, I'd call it a work-in-progress. The tension in Palin's neck suggests some strain or discomfort... although who knows why.  Maybe Sarah wasn't comfortable presenting herself in such a formal way -- with almost a matronly air.  Maybe she's not that comfortable (yet) if she isn't joshing, proud and brash.  Or maybe nobody, even Palin, really knows who she is with that much guard down.