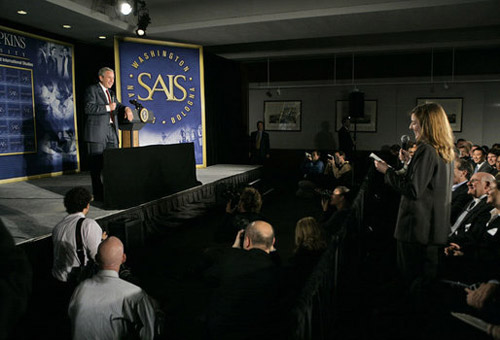 This is a two-part post locating the Blackwater shoot-out at the intersection of political and media travesty.

Here at HuffPost, I pinpoint the White House attitude that allowed a cowboy commando enterprise to run amok. At BAGnewsNotes, I examine ABC's initial coverage of the Blackwater incident to illustrate how the media colludes with this state of affairs.

Before I get to some video, however, I'd like to set the stage a bit.

Back in April '06, I did a post examining the visual dynamics of W's visit to the Nitze School of Advanced International Studies at Johns Hopkins. Looking back, that visit marked one more point of slippage (in political capital, as well as executive demeanor and body language) in Bush's terror act.

At that policy event, Bush was hit on two fronts, one having to do with his capricious declassification of an otherwise secret intelligence report supposedly justifying his reasons for going to war. The other involved his tongue-tied reaction to questions about whether the White House had tried to "go after" Joseph Wilson.

Returning to the scene, though, what rises to the surface today is that chummy sweet White House photo of the event. In that pic, a young female first-year Hopkins student stands in the audience with her notepad and asks Bush about the legal status of private security contractors in Iraq.

If you haven't seen the video -- or you haven't seen it lately, in the context of the Blackwater blow up -- it provides a twisted foreshadowing of this renegade action by this contractor/free agent. In the video, Bush tries to alternately distract, charm and joke his way out of a serious question. Though his sophmoric, yet intimidating quips doused the room in a wash of parody, the student earned a solid nod (especially compared to the fraternal order of Beltway press conference jockeys), and some laughs herself, for standing her ground.

If smirks and self-effacement have gotten Bush by on a moment-to-moment basis, the fantasy of delegation is no replacement for the real thing. If Bush promised this student he would indeed follow up on the legal limbo, the fact he forgot his homework has today left the country, and our standing with the Iraqi's, in a not-so-hilarious performance space.