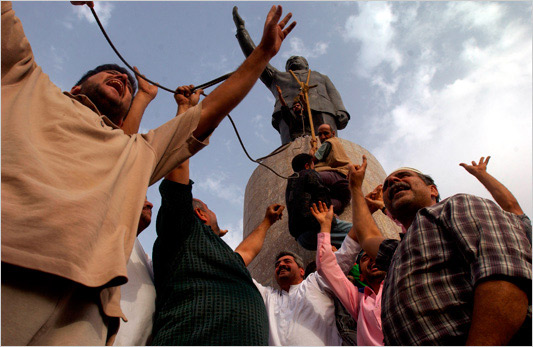 Quicker than you can say "Judith Miller," the NYT seems to have suffered a neocon-inspired fugue state in its commemoration of the fifth anniversary of the Iraqi invasion.

With the passage of time, you would think there might have been a few hard-and-fast lessons learned about what did and didn't happen relative to the administration's propaganda war-within-a-war. One of those central facts has to do with the subsequent discovery that the Iraqi's did not fill Firdos Square en masse, and did not either conceive or instigate the pulling down of Saddam's statue, and that anyone publishing tightly-focused pictures of jubilant Iraqi's appearing to agitate for the statue's removal (when the Square was cordoned off and Marine PSY OPS were managing the scene) is perpetuating a myth.

But then, how are we to explain the image above and the following caption which appeared yesterday on the blog of the NYT Baghdad bureau? It read:

Iraqis chanted as they helped put a noose around the neck of a statue of Saddam Hussein on April 9, 2003 in Baghdad.

Of course technically, the caption is not inaccurate. It is just misleading, especially with reports that the military scared up the crowd and that certain participants in the vicinity were alleged to be associates of Ahmed Chalabi. To be as fair and accurate as possible, I must add that the body of the post consists of NYT reporter Stephen Farrell's recollections of that day, having covered the fall of Baghdad for The Times of London. As regards the statue, Farrell writes:

At 3:10 p.m. four Marine M1 Abrams battle tanks arrived near Fatah (Conquest) Square. They were heading for Firdos (Paradise) Square less than a mile ahead, where, two hours later, the marines would tear down a statue of Mr. Hussein before the world's television cameras.

So, Farrell's written account -- the "what" being the tearing down of the stature, the "who" being the marines, and the "why" having to do with playing to the cameras -- is primarily accurate. So, that being the case, and given the fact a picture is worth a whole lot more words, the question is: why does the picture and caption insist on suggesting an alternate, and completely discredited reality?

Maintaining their anniversary slant, you can check out more Times "face-saving coverage" on this companion post.