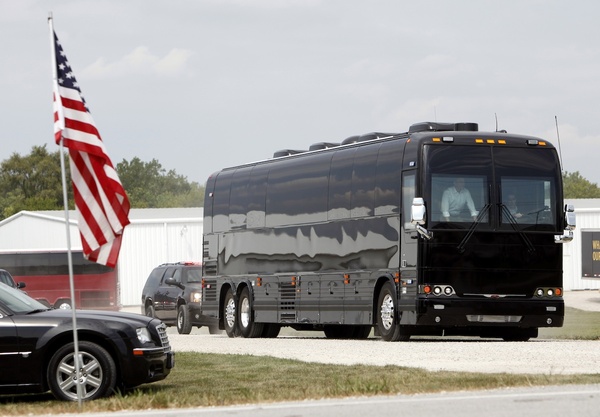 If people can't stop talking about the Obama campaign bus, the question is why?

Obama finds his center-of-gravity primarily by orienting himself to forces outside himself and in opposition to each other. Otherwise, he's primarily a blank slate. I don't think the real issue with the bus is its cost, or the fact it's made in Canada, or that it's reminiscent of Darth Vadar (though, if you don't put your own mark or signature on something, people will gladly do that for you. That's why the health care legislation, never named, is most often referred to as "ObamaCare.")

I think people are freaked out by the bus because it's a prominent and quite overt metaphor for a President who occupies the negative space; who can't be pinned down; whose ideology is "split the difference"; who is chameleon-like; who is primarily and safely defined on the White House Flickr site in the most generic, most establishment of ways -- as wrapped in the flag and the troops; as a golf fanatic; as incessantly reaching out to the GOP; as someone absolutely magnetized by American popular culture (movie stars, sports heros, the boys scouts, former presidents, fast food). Otherwise, like the bus, Obama can't and won't be identified.

I believe this nature -- the resistance to being pinned down or planted -- is also "reflected" in the many photos of Obama on the Flickr site which present him as mirrored -- as not one person in one place so much as a two-way image perfectly balanced from opposite sides.

Here, in a White House Flickr shot that predates Tiger Woods' meltdown, we see the still-new President drawing off Tiger's glow as a mega-rockstar sports figure in a shot that mirrors the other's body language. (Not surprisingly, by the way, this photo seems to have been removed from the WH Flickr site.)

And what about this? It's the shot posted on the Flickr site April 8, 2011, to mark the end-game in budget negotiations, in which Obama was ultimately faulted for capitulating to the Republican's threat to shut down the government in the last budget compromise before this most recent budget compromise. The inference from the White House, I assume, was that Obama, like a conciliatory sage, was seeing it from both sides.

Finally, the shot I love is the picture of Obama on Inauguration morning standing before a mirror.

Initially I thought, as I believe most people did, that the gaze represented a sober recognition of the responsibility ahead. Little did I appreciate that Obama might also have been looking for himself -- a man never here nor there, exactly, but always somewhere in between.