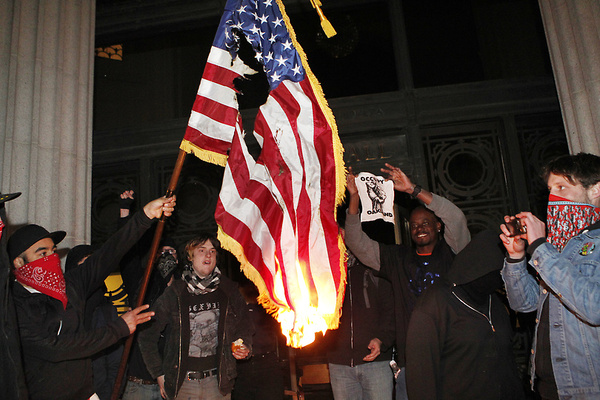 The photo almost everybody saw. 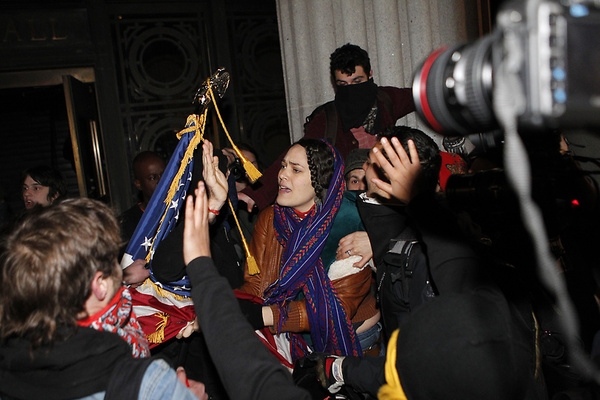 The photo almost nobody saw.

(photo: Beck Diefenbach/AP caption: A woman pleads with Occupy Oakland protestors to not burn an American flag found inside Oakland City Hall during an Occupy Oakland protest, Saturday, January 28, 2012, in Oakland, Calif. Police were in the process of arresting about 100 Occupy protesters for failing to disperse Saturday night, hours after officers used tear gas on a rowdy group of demonstrators who threw rocks and flares at them and tore down fences.)

What happens when your typical, mainstream news consumer hears little description of how Oakland PD, in violation of its own operating procedures (while under threat of a federal takeover because of excessive force), enters into a war of abandon with an overwhelmingly peaceful movement -- not to mention, the independent media, as well? And then, what happens on-top-of-that when, de-emphasizing even the angry mayor's distinction that a "radical, violent splinter-group" chose to attack City Hall, you get a culturally incendiary and profoundly prejudicial photo like this leading off national stories far-and-wide showing one of the bad boys holding up a little Occupy sign while headlines allude to -- and the captions identify them as -- regular Occupiers? I guess it's hard to conclude anything other than the fact that the movement -- in an act that makes no sense -- must have decided to torch itself.

Here's just a subset from a larger sample of photo leads from the events of the weekend:

...I think you get the picture.

Media We Are The 47 Percent Police Occupy Wall Street