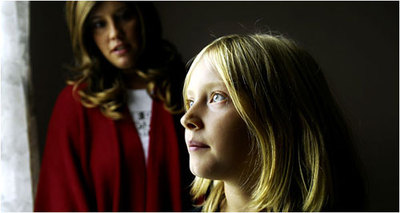 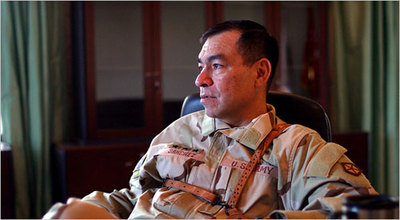 Over the last week and a half, including two examples this past Sunday, the NYT has published three portraits that share distinctive similarities. All three figures -- documented by different photographers -- are captured in profile, gazing beyond the frame of the picture in the same direction. In each instance, the figure is bathed in light and frozen in reflection. Beyond these more formal similarities, however, what the figures have in common is that their lives -- all tied to the military -- have been ruptured or poisoned by a war that should never have happened.

In this post, I share two of those portraits. The third is featured today at BAGnewsNotes. (Linked below.)

The first image above shows CamerynLee Orlowski, an eight year old from Lancaster, N.Y. She was the subject of a front page article this Sunday about children who have lost parents in Iraq. The story had to do with how children who were too young to grasp the meaning of their loss are now reaching an age of greater comprehension. CamerynLee was 3 years old when Lance Cpl. Eric J. Orlowski, a reservist in the Marine Corps, was killed in an accidental shooting in the early days of the war.

The second image appeared in a NYT article Friday before last. It shows retired Lt. Gen. Ricardo Sanchez, America's top commander in Iraq before he retired (or was forced out?) near the end of 2006. Sanchez presided over the military throughout the post-invasion period, as well during the Abu Ghraib scandal. He hit the news in a big way the other day, blaming the Administration for incompetence over a "catastrophically flawed, unrealistically optimistic war plan," describing civilian officials as possessing a "lust for power," and characterizing the so-called surge as an act of desperation.

In actuality, however, these photos have less in common than meets the eye. In Sanchez's case, for example, he should only wish that a degree of Orlowski's innocence rubbed off on him. He can look as wistful and reflective as he wants, creating the impression he's seeing the true light of the Iraq debacle. The fact remains, however, that high-level civilian and military officials throughout this Administration have managed to escape all forms of official and unofficial judgement no matter how dirty their hands became.

As compared to Sanchez (or Lt. Cmdr. Matthew Diaz, who is featured in the companion post), CamerynLee's focus is upward, not outward. With that alignment, as well as the intensity of the light and her cherubic innocence, religious or spiritual associations abound. Follow the look -- and the light -- upward, and she could be peering at Dad in heaven. (This is my biggest problem with the photo. It essentially deifies the troops, if not the mission). Consider the light on a downward path, and CamerynLee is like a protected angel.

Still, it is a dangerous thing to get caught up in romanticization here. Psychologically and developmentally, there is nothing simple or pure about constructing a relationship with a deceased parent -- especially one who went off to prevent a dictator from using non-existent WMD's and shortly thereafter, ended up getting killed by accident. What gets almost completely buried under the spirituality here is the pragmatic and, ultimately, the political. In other words, where the main focus falls in this picture (in terms of the light, and Mom's attention) is on CamerynLee's eight-year-old eyes, and their search, not just for Dad, but the where, when, how and especially, why he died.

Of course, while she's looking into it, there is also the question of how Dad could possibly have been gone so long, while the war that killed him-- more than half her lifetime ago -- still remains.